The Confessions of Edward Day

"What actors know about emotions is that they come in pairs, often in direct opposition to each other. That’s what it is to be conflicted. We want what we should not want and we know it. We desire that which is dangerous or forbidden and might cause us to suffer. We fear success, embrace failure. We strive to be independent, longing at the same time to surrender to a burning passion. We hold ourselves aloof from the people we need and seek the approval of those who have no need for us . . . "

That's the voice of Edward Day (page 178), a narrator of great depth and contradiction found in Valerie Martin's latest novel, a fictional memoir entitled The Confessions of Edward Day.

It is the 1970s. Edward Day is an aspiring, up-and-coming actor pursuing his dream in New York City. One weekend, he has a tryst (more like a conquest) with a young woman (Madeleine Delavergne) while visiting friends at the Jersey Shore and later that night, while taking a walk by himself, he leans upon a wooden rail on the boardwalk and tumbles into the Atlantic, getting swept up in a riptide. It is Guy Margate, another actor who is also spending the weekend at the beach, who rescues Edward and saves him from drowning. But the hero will later evolve into a menacing rival for Edward--in both the theater and in love. There resides the quandary of The Confessions of Edward Day, a brilliant novel by the ever-prolific Valerie Martin.

Ms. Martin is primarily a writer of "literary" fiction, but I've always found her books to be very accessible and perfectly balanced in terms of plot and character. I most admire her strong, first person narrators--see also Dr. Jekyll's housemaid in her novel, Mary Reilly, and the slave owner in Property--but Edward Day is by far my favorite. He is such a complex character--smart, self-assured, ambitious and shrewd--and I kept changing my mind about him. Sometimes I despised him and his heartless vanity, yet other times, I felt sorry him. In the end, I found empathy for him and his fate largely because Martin skillfully peels away the layers of his outer shell to reveal a deeply wounded man. (His mother, a woman with gender issues, committed suicide, and it is that tragedy that seeps into all arenas of Edward's life and colors his motivations--in life and in the theater.) The book sets up an ever-shifting power struggle between Edward and Guy as they vie for Madeleine's affections. Add to the love triangle details and insights about life in the theater, the psyche of actors, and a very clever tie-in of the characterizations and storyline of Uncle Vanya (a play by Anton Chekhov) and you won't be able to stop turning pages. The Confessions of Edward Day emerges as a beautifully-written, gripping and suspenseful thriller.
Posted by Kathleen Gerard at 1:06 PM 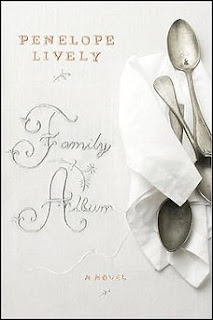 Allersmead, a large Victorian English Manor House, emerges as the main character in Penelope Lively's latest novel of domestic reality, Family Album. It is a story about how perceptions of a family (and that family's history) differ depending on the viewpoint. The novel begs the question, what went on in Allersmead back in the 1970s when the children were younger? What secret does Allersmead hold? And how has that secret shaped the future lives of each inhabitant--a family (The Harpers) with six children and an au pair. Lively is a master of detail and dialogue, both of which contribute great insight into the unreliability of family life. Through shifting points of view and a narrative that cuts back and forth between the 1970s and the present, Lively addresses the issues and themes of the novel via 16 chapters and short, episodic flashback scenes. As the title implies, events such as birthday parties, family dinners, and vacations are recalled like random snapshots in a family album. Ron Charles, of the Washington Post, said the book is " . . . full of glancing humor and spot-on truths about the way families maintain the peace through a process of willful ignorance and disciplined forgetfulness." However, each revelation, sharpened through contrasting perspectives and shifts in time, paints a clear, compelling--and haunted--picture of family dynamics.
Posted by Kathleen Gerard at 1:05 PM

Who really was Jane Austen? 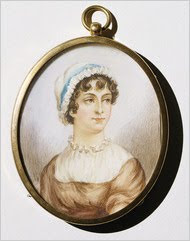 What better way to spend an autumn afternoon than to stop in at The Morgan Library in New York City and check out "A Woman's Wit: Jane Austen's Life and Legacy." It's the first time in more than a quarter of a century that The Morgan has exhibited manuscripts and letters penned by Austen herself. The four novels published in her lifetime have no surviving manuscript versions. But this exhibition features early editions of Austen's novels and the "only surviving complete draft of any of her novels, Lady Susan, an early epistolary tale whose heroine is more Machiavellian than any schemer Austen later imagined." A review of the exhibit was published in The New York Times (11/07/09) and here's some of what they had to say:

...Austen also wrote perhaps 3,000 letters over the course of her 41 years, most to her sister, Cassandra, who burned many and expurgated others that she believed reflected badly on Jane or other family members. Only 160 survive; the Morgan holds 51, more than any other institution. This exhibition offers a healthy sampling, some with pieces cut out in Cassandra’s quest for decorum...

...Because paper was expensive, Austen typically used a single sheet, folded in half to make four pages. But when she had more to say, she would fill all usable space, then (as was sometimes the custom) turn the sheet sideways and write perpendicularly over her own script. She completed one letter here by turning it upside down and writing between the lines...

...And though Austen was very much a private person — her novels were published anonymously at first — there is also a trace here of a public world that she mostly turned her back on, as if it might crassly impinge on her novelistic universe...

The show at The Morgan allows readers and fans of Austen's work to glimpse the woman beyond the page. In addition to the exhibit, there's also a short (16 minute) documentary, "The Divine Jane," which shows some of her letters and manuscripts and features contemporary writers and scholars speaking about Austen's importance. The film is directed by the Italian photographer (and filmmaker) Francesco Carrozzini. You can view the documentary while you're at The Morgan or see it HERE.

A Place of Execution

Masterpiece Theater (PBS) has been airing a two-part film adaptation of A Place of Execution, a novel by Val McDermid, an award-winning British mystery writer.

Both the novel and the movie share a dual plot structure. One plot focuses on the murder investigation as it played out in real time in 1963, while the second plot re-examines the investigation in the present day. One character, George Bennett (the investigator from the original crime) becomes the bridge between the two plots and the two eras. Ms. McDermid's story--on the page or on the small screen--is a multi-layered tale about perception and reality, and it is a fascinating study in psychological suspense. Here is a synopsis of the storyline courtesy of PBS:

Modern-day London: Journalist Catherine Heathcote is making a documentary about Alison Carter, a schoolgirl who vanished from the English village of Scardale in 1963, sparking a major police hunt and making a hero of investigating officer George Bennett.

When George hastily withdraws his cooperation, Catherine is devastated and sets off for Scardale to demand an explanation, accompanied by her rebellious teenage daughter Sasha. As she tries to salvage her documentary, Catherine uncovers new information — but the truth may indict George, the man she so highly admires. A tragic turn of events threatens to silence Catherine's inquiry entirely.

1963: In his first missing person investigation, George Bennett carefully pieces together a case against one of Alison's family members. Incriminating evidence offers a strong link to the apparent murder scene. But under intense questioning, the suspect is unnervingly calm and unwavering — repeatedly claiming innocence.

For a limited time, PBS is enabling viewers to watch the film adaptation online. Part One is available for viewing now. Part Two will be available starting on November 9th. Log on HERE to learn more and tune in.

Photos from PBS.org
Posted by Kathleen Gerard at 7:43 PM 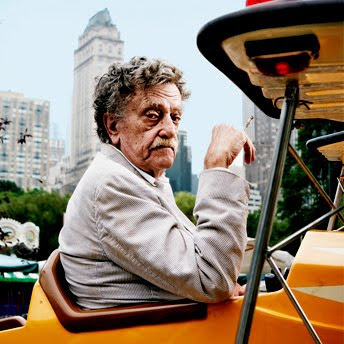 Dave Eggers, author of many highly-touted books, screenwriter for Where the Wild Things Are and Away We Go, and creator of McSweeney's (a literary journal) shared his review of Look at the Birdie: Unpublished Short Fiction by the late Kurt Vonnegut in the New York Times Book Review (11/1/09).

I discovered (and fell in love with) Vonnegut's short fiction long before I ever seriously considered that storytelling could be a viable function of my life. I was always intrigued--and greatly influenced--by what my much more talented, creative and over-achieving sisters and brother were reading. One rainy day, I remember sneaking into my brother's room, scouring his bookshelves and borrowing his copy of Vonnegut's short stories, Welcome to the Monkey House. (The title is what lured me.) "Long Walk to Forever" is the story from that collection that stole my heart. It is a tale of stark realism about the possibilities of love. It's told simply and straightforwardly--no gimmicks or tricks--and the dialogue is pitch-perfect. I loved each story in Monkey House--the shifts in point-of-view were so refreshing, as were Vonnegut's dips into satire and futuristic fantasy--that I never did return that book to my brother's room. To this day, that well-read and worn paperback still sits on a shelf over my writing desk with many other books that have been my greatest teachers--in craft and in life.

If you want to read more about what Vonnegut had to say about the art of storytelling, San Diego State University published "How to Write With Style"--an excerpt from Vonnegut's book of essays, Palm Sunday (New York: Dial Press, 1999). In the piece, Mr. V suggests the following seven points to improve your writing:


Link to the article for more insight into the above.
Great advice for writers--of all genres.

Photo of Kurt Vonnegut from State University of San Diego
Posted by Kathleen Gerard at 6:55 PM