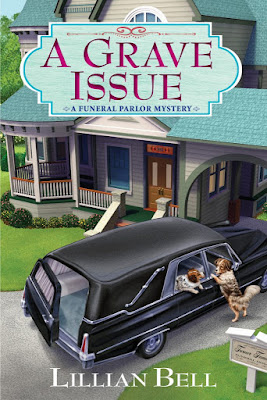 A fired TV reporter turned mortician investigates the death of a small-town banker who made enemies and harbored secrets.

Author Lillian Bell* launches a lively new mystery series starring Desiree Turner, a TV reporter axed from her job after a hot microphone incident went viral. Returning to Verbena, Calif., a small town near Sacramento, Desiree rejoins her sister Donna, brother-in-law Greg and their Uncle Joey. They all live and work together at the family-owned funeral home. The Turners deal in grief, including their own, since the widowed father of Desiree and Donna died in a surfing accident. A year later, the sisters still struggle with his disappearance.
When Rosemarie and Alan Brewer's beloved pet emu dies, the couple blames the unruly shepherd dogs belonging to neighbors Lola and Kyle Hansen. Their conflict escalates into a fistfight between the wives; soon after, Alan is found murdered. While the Turners tend to Alan's funeral, Kyle Hansen, who was like a second father to Desiree and Donna, becomes the prime suspect in Alan's homicide. Inquisitive Desiree starts a quest to exonerate Kyle and learn more about the murder victim, who was the manager of the Verbena Union Bank. Desiree discovers that Alan harbored many secrets and had a long list of enemies. Suspenseful subplots and red herrings unravel this smartly crafted comic mystery that assembles a well-conceived cast of suspects embroiled in the stifling absurdities of small-town life. Bell cleverly ties up loose ends, while leaving some stragglers that are sure to rouse reader enthusiasm for the next installment.

A Grave Issue: A Funeral Parlor Mystery by Lillian Bell


NOTE: This review is a reprint and is being posted with the permission of Shelf Awareness. To read this review on Shelf Awareness: Reader's Edition (March 9, 2017), link HERE
Posted by Kathleen Gerard at 12:00 AM 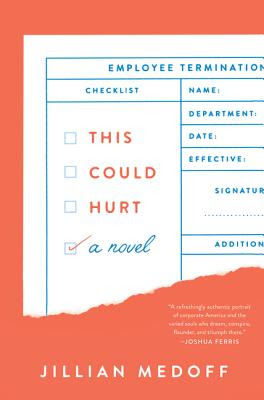 A shrewd novel of corporate culture examines how a group of HR employees faces fallout from the Great Recession.

Corporate America during nine months of the Great Recession is the setting of This Could Hurt, Jillian Medoff's shrewd and deeply affecting fourth novel. Ellery Consumer Research--with offices in New York City, Raleigh and Atlanta--is a cutting-edge, boutique market research firm for clients like Walmart and General Motors. Medoff roots the story amid the company's shrinking human resources department in New York, offering a well-drawn ensemble cast of flawed characters who orbit around Rosalita "Rosa" Guerrero, the 64-year-old HR chief.

Rosa is a seasoned old-timer--personally and professionally. She is bossy, but fair. Her take-charge, no-nonsense approach serves as a "voice of clarity and calm" in her quest to advocate for and boost the morale of those in her department despite drastic corporate cutbacks. Rosa's predicament grows more complex when she's forced to fire the v-p of operations--a trusted confidant of Rosa and her right hand--who was being groomed as her successor, but was embezzling from the company. His departure leaves an open door for the rest of the HR staff, most of whom are scrambling to find ways to stay employed under the corporate restructuring and downsizing. Medoff (I Couldn't Love You More) has a spot-on grasp on the often cutthroat nuances of office politics--especially within the high-stakes uncertainty of the Great Recession. She skillfully reveals the modus operandi of the staff as they vie to keep their jobs. Sharply drawn intimate details about the lives of each character add even greater depth and broaden the timeless appeal of this very smart, thoroughly absorbing story.

This Could Hurt by Jillian Medoff

To read the long-form review of this novel as featured on Shelf Awareness for the Book Trade (December 7, 2017), link HERE