What I Hate: From A to Z 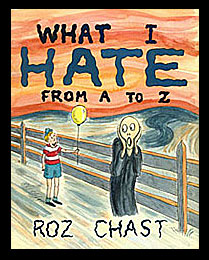 We all have them - fears, neuroses and pet peeves. And there's no one else on earth who can better capture and articulate the absurdity of the human psyche than the prolific and brilliant, long-time cartoonist for The New Yorker, Roz Chast (Theories of Everything; The Party, After You Left).

Chast is a self-proclaimed "anxious person." In her new book, WHAT I HATE: FROM A to Z, she brings her own special brand of wry humor and artistic style to a clever, alphabetized catalog of her favorite personal anxieties and concerns. Chast utilizes all 26 letters of the alphabet, and offers runners up and understudies at the end of the book, striking a perfect balance between the literary and the visual. Each full-page cartoon entry, and brief passage of accompanying text, resonates with insight and wit about the human condition. Rendered via Chast's cerebral point-of-view, fears of elevators, getting lost, heights, nightmares, and water-bugs (to name just a few) are each cast in a chilling new light. And the more eccentric, highly specialized concerns like alien abduction, carnival ride maintenance, Jello, Ouija boards, premature burial, undertow and the color yellow are full of irony as well as dark, intellectual depth.

Chast is a meticulous illustrator, and yet a charming simplicity reigns as the hallmark of her work. The unique, sketchy quality of her art is what makes it so appealing to a wide, crossover audience. Taken at face value or more carefully considered, these never-before published cartoons evoke deeper thoughts while inspiring the viewer to laugh out loud.

Please note: This review is a reprint and is being posted with the permission of Shelf Awareness. To read this review (in a slightly different form) on Shelf Awareness: Reader's Edition (10/18/11), click HERE.
Posted by Kathleen Gerard at 12:00 PM

The Girl in the Polka-Dot Dress 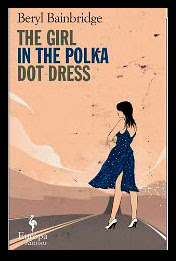 "When I write a novel, I'm writing about my own life; I'm writing a biography almost always. And to make it look like a novel, I either have a murder or a death at the end."  ~ Beryl Bainbridge

I had never heard of the British novelist, Beryl Bainbridge until she died on July 2, 2010. It was by perusing her obituaries, and learning her take on writing and craft, that I became interested in seeking out more of her work. She didn't have an easy life or road to publication, but that didn't stop her from trying to make sense of the world by writing stories. She was a career novelist, and at the time of her death, she left behind twenty books. Her historical fiction was critically acclaimed and launched by her interest in real life figures (Adolf Hitler in her novel, Young Adolf) or topics (the Titantic in Every Man for Himself). She could construct an entire fictional universe around small kernels of truth.

The Girl in the Polka-Dot Dress was the novel Bainbridge had been working on at the time of her death. It was "re-mastered" and published posthumously. The story is classic Bainbridge - a compressed read (under 200 pages) where every word and scene is carefully chosen and infused with great wit and absurdity, however dark the themes.

The Girl in the Polka-Dot Dress grew out of Bainbridge's interest in the mystery girl who was reportedly involved in the assassination of Robert Kennedy. The story is also said to be based on Bainbridge's own experiences while traveling through the United States in the 1960s.

Bainbridge sets this novel in 1968. It traces the cross-country adventure of two misfits: Rose, a young dental hygienist, who arrives in the U.S. from London; and Harold, an older man, a widower from the States, stuck in a psychological state of inertia. What brings the two, very different characters together is their mutual search to find Dr. Wheeler, a man working on the campaign trail for Robert Kennedy.

The doctor holds a sense of personal significance to both Rose and Harold. For Rose, Dr. Wheeler was a force for good amid her troubled childhood (although as the story unravels, "good" becomes a rather questionable adjective). For Harold, Dr. Wheeler represents a force of evil that led to the greatest calamity of his life. Over the course of the story, Dr. Wheeler is a presence that continues to elude the duo as they travel from Baltimore to Los Angeles. Thus, the doctor's absence drives the plot. However, the true resonance of the story lies in the numerous encounters Rose and Harold have along the way. The eccentricities of each person they meet reveal something more about Rose and Harold, while also making larger statements about the menacing nature of the world, especially in the 60s.

What I found most intriguing about The Girl in the Polka-Dot Dress was how the reader knows exactly where the story is headed and yet, via Bainbridge's presentation--the nuances of her characters and themes of sin, sudden death and violence--she adds surprising twists and levity to what becomes an immensely gripping story. In the end, the book becomes less about the destination and more about the journey, which is especially apropos in terms of the "unfinished" nature of the book and Bainbridge's immortality on the page.