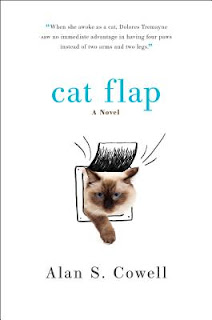 A successful, British executive--a wife and mother--has her mind and soul metamorphosed into the family cat.
In his novel Cat Flap, British journalist Alan S. Cowell presents a modern fable: Dolores Tremayne--wife, mother and a successful corporate executive of African British descent--wakes one day and discovers that part of her has migrated and metamorphosed into the body of the family's "finely bred, highly pedigreed" indoor cat.
The human Dolores sets off on a Lufthansa flight bound for a high-powered business meeting with a prestigious car company in Munich, Germany. Her feline self--her mind and soul, aka "X"--stays behind and gains a surprising glimpse into the daily life of her sexy, white husband, Gerald, a former drug dealer-user and stalled novelist. His first book had been "well-received, if not well sold or marketed" and a three-book commitment looms over him, along with his daily, demanding responsibilities as a house-husband to his and Dolores's two little girls.
One day, when Gerald exits the apartment, curious X slips out and follows him. She discovers that he is a serial philanderer juggling numerous shocking exploits. Being trapped in the body of a cat shutters all of Dolores's emotional human instincts and reactions. However, through some creative ingenuity, X and human Dolores join forces as avenging spirits.
Cowell (The Terminal Spy) has never shied away from exploring dark themes in his writing--those found in newspaper journalism, politics, war, risk taking and spying. Readers will eagerly suspend their disbelief, immersing themselves in Cowell's cleverly conceived, satirical novel that probes contemporary issues of race, identity and sexuality.


NOTE: This review is a reprint and is being posted with the permission of Shelf Awareness. To read this review on Shelf Awareness: Reader's Edition (August 3, 2018), link HERE
Posted by Kathleen Gerard at 12:00 AM Links to this post

Murder at the Mill 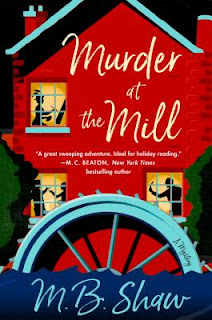 A portrait painter turns amateur sleuth when a corpse is discovered on Christmas Day in an idyllic English town.
M.B. Shaw is the pen name of British writer Tilly Bagshawe, who has written several contemporary romance novels (Scandalous), as well as thrillers for the literary estate of Sidney Sheldon (Sidney Sheldon's The Tides of Memory). Murder at theMill is the first installment of her smart, lively mystery series; in it Shaw probes the secrets of an idyllic Hampshire village.
The book opens in December. Iris Grey--a 41-year-old portrait painter--has fled her home in Clapham and her estranged husband, Ian McBride, a once successful playwright. After several years of failing to conceive a child via in vitro fertilization, the couple--heartsick and broke--has split up. Iris had hoped that by settling in to Mill Cottage in Hazelford ("Alone. Like a mad cat lady, only without the cats") she would "paint and hide and lick her wounds." Shortly after her arrival, however, she's commissioned to paint a portrait of resident Dominic Wetherby, a charismatic and famous crime writer. During the Wetherbys' posh Christmas party, a corpse is discovered in the river. The shock leaves the family, townsfolk, gossipmongers and the paparazzi reeling. Speculations abound. Was the death an accident--or murder?
Shaw has created a wise and winning sleuth in Iris. Her keen, observational skills honed from her artistic sensibility allow her to detect subtle nuances of human emotion and motivation. This, along with an intricate, cozy plot--and fully realized characters embroiled in a dynamic whodunit and why--will keep readers guessing, and eager for future installments.

Murder at the Mill: The Iris Grey Mysteries (Book One) by M.B. Shaw

Posted by Kathleen Gerard at 12:00 AM Links to this post