During the lively, engaging talk entitled, "Concept to Completion," Strout discussed in depth the seven-year process of crafting her latest novel and the importance of fiction. 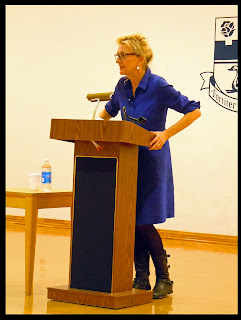 Strout had been thinking about The Burgess Boys since writing Abide with Me (published in 2006). The childhood incident surrounding the Burgess children was actually mentioned in an early draft of that novel, but never made it into the finished product.


Strout deems herself a "slow writer," often riddled with "panic and anxiety" about her work.  She does not write her books linearly from beginning to end. Rather her curiosity is "innocent and earnest . . . I do not want to present anything straightforward.  Life is a mess," she said.  "If you want to become an accurate writer (of old fashioned realism) you need to acknowledge that mess."


Character or "an abiding image" is what propels Strout into her work. Themes and storylines gradually evolve through writing, and she "follows her characters" often allowing them to "behave badly."


"I am not there to judge," said Strout. 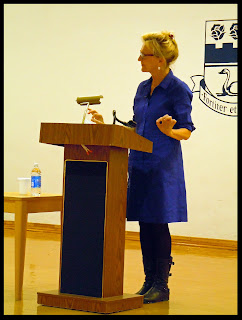 She discussed how the prologue of The Burgess Boys emerged five years into the writing of the novel and how she took great pains and had to make "huge decisions" over individual sentences to make those few short pages "truthful in tone and content."  They offer the reader an intimate introduction to the world of the book and provide a map outlining the journey taken over the course of the story.

"I am constantly battling between what I feel the reader needs and what I feel is truthful," she said. "Fiction is truer than most of the nonfiction we read because in fiction one can stay closer to the facts."

Cultural differences play a big part in the fabric of The Burgess Boys - whether a diversity of cultural lifestyles of those in the same family and/or cultural differences between Americans and Somali (Muslim) refugees.  Strout did extensive research into the Somali way of life and also did field work in prison systems in Maine and New York City in order to bring authenticity to the narrative. At times, learning about these cultural disparities became a rude awakening.

Strout believes that, "Novels are there as a social tool to bring the news and make readers understand that people are more alike than they are different. And while those differences can be significant, the only way we can really touch each other's shoulders is through fiction. We only have each other." 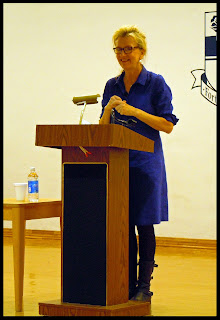 When asked during the Q&A about specific books on craft that have influenced her writing, Strout cited War and Peace and The Journals of John Cheever.  "These books are not specifically about craft, but they've greatly instructed me in my work."

Note:  A condensed version of this same article was featured in Shelf Awareness (4/30/13) "Image of the Day: Fiction is Truer than Most Nonfiction." Link HERE to read. 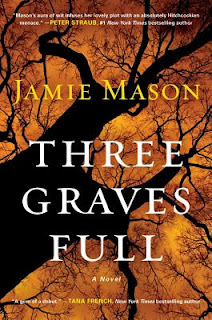 "The world was short one human being because of Jason Getty," a lonely widower and "crackerjack wallflower" who, on a moonlit October night, was pushed too far and killed a man who had it coming. Jason may have hidden the body, burying the corpse in his suburban backyard, but he can't live with himself. For seventeen months, he goes through the motions of living his life, most nights "watching through the dining-room window for the unavoidable squad car to turn down the street and ruin his life."

When landscapers come to do a routine clean-up of Jason's property, they discover not one body, but two, that of a man and a woman, buried in the flower bed in the front of Jason's house. (Uh-oh!) The guilt-ridden nightmare of Jason's life suddenly flares. He is thrust into a harrowing investigation to identify the two corpses--how and why they got there--and he is forced to shed his isolated existence. Will the authorities find the third body?

Jason's destiny becomes intertwined with a jilted woman looking for the missing pieces of her own life, an upstanding small-town detective and his astute police dog and a mysterious loner whose own actions and past may very well dictate the fates of all involved.

In Three Graves Full, Jamie Mason has crafted an off-beat, menacing tale about a criminal with a conscience. Irony and dark humor propel the plot in ways that reinvigorate the crime novel, revealing sharp insights into the complexities of the human heart and mind.

Please note: This review is a reprint and is being posted (in a slightly different form) with the permission of Shelf Awareness. To read this review on Shelf Awareness: Reader's Edition (2/15/13), click HERE.
Posted by Kathleen Gerard at 12:00 AM

Stay tuned...
Will be sharing my thoughts about this book
May 1st


A much anticipated novel focusing on spiritual issues

To learn more, visit Amazon and/or the Paulo Coelho's website

Posted by Kathleen Gerard at 6:15 PM