The Life Lessons of Baseball

"Get your peanuts, Cracker Jacks, hot dogs, beer... and books?"
There is so much more to the game of baseball than stats or what's witnessed via your TV or even among a crowd of thousands cheering in the stands. Baseball embodies universal stories and life lessons that can be found on the field and off--especially in the pages of baseball-inspired books.

The theme of "life isn't always fair" is the idea captured in Nobody's Perfect: Two Men, One Call, and a Game for Baseball History by Armando Galarraga and Jim Joyce with Daniel Paisner. The story is a detailed, factual retelling of a first-base umpire's call that shattered a historical, almost perfect game played between the Detroit Tigers and Cleveland Indians on June 2, 2010.

"You win some, you lose some" resounds in The Game from Where I Stand. Doug Glanville's memoir, now in paperback, is an eye-opening, gritty, insider's perspective of a life spent working toward building a career in the Major Leagues and rubbing elbows with a host of big-name ballplayers.

"Practice makes perfect, but be careful what you wish for" is the embodiment ofThe Art of Fielding, Chad Harbach's debut novel about baseball. A small, scrawny high school kid, with a major league talent for playing short stop, is recruited by a private college on the shores of Lake Michigan. But when a throw by the young infielder goes dreadfully awry, his life and the lives of those around him are suddenly changed in unexpected ways.

"Money talks--but not always" is the overriding theme in Moneyball, a mega-hit on page and screen. Michael Lewis details the story of how the Oakland Athletics reinvented their baseball team on a budget. And in Hot Stove Economics: Understanding Baseball's Second Season, economist J.C. Bradbury examines what constitutes a first-rate ball club and how the worth of baseball players--and success--is calculated.


Note: This article is a reprint and is being posted with the permission of Shelf Awareness. To read this piece as published on Shelf Awareness for Readers (4/13/12), link HERE
Posted by Kathleen Gerard at 12:00 AM

Writers on the Edge 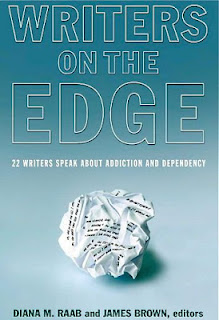 In the Foreward to the book Writers on The Edge: 22 Writers Speak About Addiction and Dependency, edited by Diana M. Raab and James Brown, writer Jerry Stahl (Permanent Midnight) tells the reader that, "America, at this point in time, may not manufacture much. But we do manufacture addicts." He goes on to state that approximately one out of four Americans qualifies as an addict of some kind, be it a compulsion to alcohol, drugs, gambling, sex, overeating or even love. Amazing, isn't it?  And what's even more amazing are the 22 first person narratives, by accomplished writers, that illuminate personal experiences with addiction and dependency. The editors also weave in stories of depression and suicide stating that they "feed into the same tributary."

Most of the selections in the anthology are essays, but also included are moving, often heartbreaking, poems by Molly Peacock and John Amen to name just a few.

Each entry depicts the painful, often harrowing, consequences of addictive behaviors. Raab (Writers and Their Notebooks) states in her introduction that the anthology aims to "be helpful to all artistic personalities who wish to gain a stronger sense of how their colleagues navigate their way through addiction, mental illness, suicide and other obsessive, self-destructive behaviors."  She hopes the stories will offer "insight and hope to artists themselves and loved ones who also have to bear the consequences." The anthology ultimately asks the reader to consider if addiction might be an occupational hazard of the creative life.

Ruth Fowler (No Man's Land) who, in her essay, finds herself forced to chose between being a drinker or a writer, offers insight into the creative personality by eloquently stating, "Sometimes feeling everything so acutely is unbearably painful."

With unflinching honesty and courage these narratives and poems ultimately shine light into some very dark and ominous corners.

Some essays take an outsider's perspective. Scott Russell Sanders (A Private History of Awe) views his alcoholic father over the course of a lifetime. A suicide, in the poignant essay by Kera Bolonik (Salon), shows how addictions can inspire others to change their own lives. Maud Casey (The Shape of Things to Come) peruses a journal her mother kept during Casey's depressive collapse and begins to understand how hard it is to watch someone you love succumb to addictive behavior. And Victoria Patterson (The Vacant Paradise) bears witness to an alcoholic grandfather only to realize, most chillingly, that the two share many of the same traits.

Other essays, jump head-first into the mire of addictive behavior. Margaret-Bullitt Jonas (Draftjournal) offers an affecting analysis of an unhealthy love relationship. Steven and Frederick Barthelme (Double Down) detail how two brothers, respected authors and college professors, descended into a gripping world of slot machines and blackjack tables.  And Stephen Jay Schwartz (Boulevard) struggles to conquer a sex addiction only to be tempted by new pitfalls.

What all the writers have in common is the daring ability to face overwhelming truths - and live to tell about them. I'm sure the anthology was not accidentally subtitled with the word "speak" as in 22 Writers Speak About Addiction and Dependency. In the end, Raab and Brown have assembled a host of accomplished writers and thinkers allowing them to finally give "voice," on the page, to their unique stories of healing and survival.

Posted by Kathleen Gerard at 10:13 AM