The Writers Life
Sigrid Nunez is the author of seven books and many short stories and essays, and she teaches writing. She's received a Whiting Award, the Rome Prize in Literature and a Berlin Prize fellowship. In Sempre Susan, Nunez wrote a revealing memoir about Susan Sontag, an American writer, filmmaker, teacher and political activist who played a significant role in Nunez's personal and professional life. In her new novel, The Friend (see my review below), Nunez explores the bond between a grief-stricken woman and a dog she reluctantly agrees to foster after the death of her mentor and friend.

Suicide, writing and dogs form the basis of this novel.

Yes, in recent years I happened to learn that a number of people I knew had been obsessing about suicide. Not that they were actually planning to do it, but it seemed to be always on their minds. And in fact, very sadly, one of those people has since taken his own life. So that was one very important thread. Another thread was my work as a writing teacher and the idea of literary mentorship. And then I've always been interested in human-animal companionship. I saw a way to explore all these subjects in one novel.

Did you know from the start that a dog--Apollo--would be the cornerstone of The Friend?

I can't remember exactly at what point Apollo became such an important part of the story, but he's based on dogs I've known in real life.

What's been your experience with dogs?

I've always loved dogs. It was one of the great "unhappinesses" of my childhood that we lived in a place where no dogs were allowed. Later, around the time I went to college, my family had a Great Dane, and I had a dog whose sire was a Great Dane when I was in my 20s.

Is your history with Great Danes why you chose to create Apollo as a Harlequin Great Dane in the novel?

I was drawn to the idea of an exceptionally large and visually striking animal.

Many of your novels are written in a very intimate, first-person point of view. Do you find it easier, more accessible, to write in this voice?

It's not really a question of what's easier or more accessible but rather which point of view best suits a particular story. In The Friend, for example, from the beginning I knew I wanted an intimate, first-person voice. To be more precise, I wanted the narrative to sound like a letter, and not just any letter but a love letter. That was the tone I was going for: intimate, hushed, urgent.

An unnamed speaker narrates The Friend. And many other characters are also unnamed. Why?

To name or not to name a fictional character isn't a choice that I make beforehand. It's something intuitive that comes with the writing. In writing The Friend, any time I thought about inventing a name for a human character it struck a false note, and I was immediately compelled to get rid of it.

The Friend is rooted in the challenges of a writer's life. There's a quote in the book: "Some would say that, after all, the one sure way for an artist to know his work had failed was if everyone 'got' it." What's your feeling about this idea?

I would say that if everyone likes and approves of a certain work, it can't be very interesting. Oscar Wilde was right: "Diversity of opinion about a work of art shows that the work is new, complex, and vital. When critics disagree, the artist is in accord with himself."

How did writing The Friend differ from writing Sempre Susan?

In many ways, writing the memoir was easier than writing the novel for the simple reason that I didn't have to invent anything. I already had the story and the characters. But in other ways the process was much the same: a struggle to find the right words and the right order of words to make the narrative as effective as possible.

Your novels are unified by themes of death and grief and an inherent lack of understanding between people, yet a sincere need for protagonists to try to understand people and circumstances anyway. What draws you to these ideas and why?

These are some of the most important aspects of human experience, matters that touch us all. It seems to me only natural that this would be the material a novelist would want to grapple with and that people would want to read about.

If you could not be a writer and/or teacher of writing, what career path would you choose?

This is something I touch on in The Friend. My love for animals has always been very strong. I love all animals and am fascinated by animal behavior. I may very well have missed my true calling. I often wish I had pursued some career that had to do with the study, care or training of animals. I think I would have found much fulfillment in such work.

What can readers expect from you next?

I'm about 50 pages into a new novel, which has a narrative voice very similar to that of The Friend.

Will the new novel include another dog?

No. No animals this time--at least, not yet.

This interview is a reprint and is being posted with the permission of Shelf Awareness. To read this Q&A on Shelf Awareness for Readers (2/2/18), link HERE

Posted by Kathleen Gerard at 12:02 AM 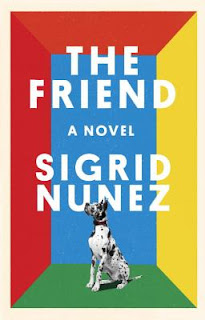 A writer who lives in isolation takes in her deceased mentor's dog, and the two of them come to grips with death and loss--and each other.


Sigrid Nunez (Sempre Susan) has not graced the literary world with a novel in almost a decade--but the wait has surely been worth it. In The Friend, she takes readers on a reflective journey through a labyrinth of grief, loss and loneliness. This meditative, beautifully written novel reads as intimately as a memoir. It is narrated by a sensitive intellectual, an unnamed woman--a writer and teacher--who lives an isolated life in a tiny, barely 500-square-foot, rent-controlled New York City apartment.
The suicide of her mentor--a writer and teacher, one of the narrator's closest and oldest friends--forces her to grapple with the role he played in her life, the meaning of his life and death, as well as her own existence in the world. When she is ultimately asked to take in the deceased's dog--a 180-pound Harlequin Great Dane named Apollo--she is reluctant. The narrator lives alone and works mostly at home. Although she prefers cats, the affection and devotion her mentor had for Apollo sways her decision. Despite her building not allowing pets, she agrees to take the dog temporarily. His entrance adds a new dimension to the landscape of loss, as he mourns his master in his own way. But, as the narrator says, "You cannot explain death to a dog."
The pain of the narrator's bereavement is dealt with through remembering and writing. But the bond she forms with the dog--how they adapt to each other and a world darkened by an aching void--forges this thought-provoking, philosophical story. Ultimately, The Friend ponders the meanings of loyalty, love, friendship and a buoyant creative spirit. --

The Friend: A Novel by Sigrid Nunez 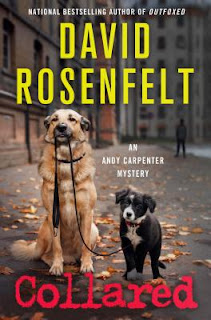 An abandoned border collie revives a child abduction case and the career of a devoted defense attorney.


Andy Carpenter is an independently wealthy defense attorney in Paterson, N.J. He's also an exasperating husband, a newly adoptive father and a devoted animal lover. In Collared, the 14th installment in David Rosenfelt's dog-centric mystery series, Andy and his crackerjack investigative team go back to work. This time, a border collie with a limp is abandoned at the rescue shelter owned by Andy. When the stray is scanned, the embedded identity chip reveals he is actually Cody, a dog whose hair sample DNA proved the lynchpin in a prior kidnapping case.
Who left the dog at the shelter and why? Andy and his cohorts--including his long-suffering wife, an ex-police officer--resurrect a three-year-old case involving Cody, whose owner was Jill Hickman. At the age of 35, Jill--a successful, single businesswoman--adopted a one-month-old child she named Dylan. When Hickman's nanny took Dylan and Cody for a walk, the nanny was brutally assaulted, and the child and the dog both disappeared. The "DNA dog," as Cody was nicknamed, ultimately led police to the suspected kidnapper--a once top employee from Hickman's company and also her former fiancé--who was found guilty of the crime, though Cody and Dylan remained missing. With Cody's re-emergence, hopes rise for all involved. Might Dylan, too, still be alive? Short chapters and dialogue-driven prose are hallmarks of Rosenfelt's (Hounded) suspenseful, long-running series. This installment is crafted with an intriguing premise, witty recurrent characters and a well-conceived mystery that unravels with surprising twists.