The Luster of Lost Things 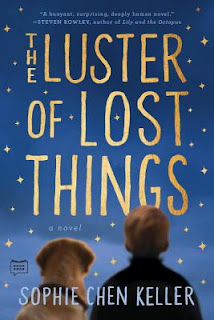 A gifted, fatherless boy with a communication disorder goes on a quest to save his mother's magical bakery.


Walter Lavender Jr. is a 12-year-old with a motor speech disorder, a brain pathway dysfunction that prevents him from producing the words he wishes to speak. Walter may be isolated and withdrawn, but over the years, he's learned to adapt and cultivate an uncanny sense of perception. This turns him into a sought-after expert at finding lost things. Despite finding other people's prized possessions, a great sense of loss marks Walter's own life. His father, an airline co-pilot, disappeared on a flight to Bombay just three days before Walter was born.

While he waits for his father's return, Walter skirts bullies at school and spends time at the Lavenders, his mother's eclectic bakery in the West Village of New York City. Devoted patrons believe the desserts are magical--the angel food cake is light enough to whisk away pounds, and carefully crafted marzipan dragons breathe fire. The centerpiece and good luck charm of the success of the bakery, however, is a treasured, leather-bound manuscript--an illustrated winter's tale of lost love. When the book goes missing, the shop takes a nosedive: the magic suddenly evaporates from the desserts, business drops off, a French bakery opens a few doors away and the landlord threatens to double the rent. Fearful that all will be lost, Walter commences his 85th--and most personally challenging--case.

With straightforward prose, Sophie Chen Keller tells this insightful story from Walter's singular point of view. This is a feel-good, message-driven story about the restorative power of human connectedness and how acts of kindness can ultimately change lives.


The Luster of Lost Things by Sophie Chen Keller

Posted by Kathleen Gerard at 12:15 AM

Christmas Romances to Melt the Heart

FROM MY SHELF
Christmas--the season known to foster peace, love and good tidings of joy--is on the way. Sometimes, however, the sparkly cheer of intended amorous bliss sours at the most wonderful time of the year. Several new novels--stand-alones and additional installments of well-established series--offer feel-good stories of romantic dilemmas.

Elin Hilderbrand has expanded her trilogy of Christmas novels into a quartet with Winter Solstice, which reunites the extended Quinn family of Nantucket. This year, everyone is finally celebrating together under the same roof of the family-owned and -operated Winter Street Inn. But can the welcoming familial nest help resolve festering romantic entanglements, amid long-held traditions, heartfelt reunions and farewells?

A host of clever complications ensues in Merry and Bright by Debbie Macomber, where a single, 20-something office temp reluctantly pursues a new relationship after her well-meaning, but meddling mother and special needs brother set up an online dating profile for her during the holidays.

Ugly Christmas trees upend a whole community in Christmas in Icicle Falls by Sheila Roberts, where one resident in particular, a successful writer, learns that everything and everyone has potential--including an old, overlooked friend who just might hold the key to unexpected romance.

Sugar Pine Trail by RaeAnne Thayne centers on a kindhearted, single, small-town librarian who longs to create a sense of family for herself during Christmas. Her plans go awry when she falls for her tenant--a handsome, sexy, commitment-phobic pilot who has a notorious reputation with women.

In Sugarplum Way by Debbie Mason, the future of true love is tested. A surprising, passionate kiss under the mistletoe at the town Christmas party turns the life of a romance writer--in search of her own happily-ever-after--completely upside down.


NOTE: This column previously appeared in Shelf Awareness for Readers (11/3/17) and is being reprinted with their permission. Link HERE to read the column as originally published.
Posted by Kathleen Gerard at 12:00 AM