The Comfort of Lies 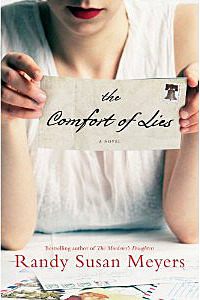 Motherhood is at the crux of The Comfort of Lies, a novel that braids the stories of three, very different women - women bonded by secrets, lies and a child conceived out of wedlock, the byproduct of an illicit affair between Tia, a young woman grappling to find her place in the world, and Nathan, a happily married man and father of two boys.

When Tia tells Nathan that she's pregnant, he suddenly vanishes from her life. Thus, Tia decides to give her baby girl up for adoption to a woman named Caroline, a workaholic doctor/pathologist, whose husband is pressuring her to start a family.

Fast forward five years: Caroline, the girl's adoptive mother, persists in working long hours, making excuses and skirting her responsibilities for the child,which takes a toll on her marriage.  Maybe she's just not cut out to be a wife and a mother, after all?

In the meantime, Nathan's wife, Juliette, believes she's put the knowledge of her husband's affair behind her. But when a letter arrives addressed to her husband from Tia, "the other woman," and she discovers that Nathan has a child, a daughter, he's never told her about, Juliette's seemingly re-created life and marriage is again shattered. She secretly goes in search of both Tia and Caroline in order to learn more.

Issues of trust, vulnerability and forgiveness emerge as these three women's lives intersect. Each is forced to face the facts of her life and make hard decisions for the future. Is there any way this five year-old child might be loved by all three women?

Randy Susan Meyers (The Murderer's Daughters) has written a multi-faceted, thought-provoking novel about the complicated lives and challenges contemporary women--and families--face. Chapters told from alternating viewpoints allow readers to experience the psyches of the characters as their private motivations and pain are examined until truth is ultimately exposed.

Note: This book was provided for review by Atria Books/Simon and Schuster
Posted by Kathleen Gerard at 12:00 AM 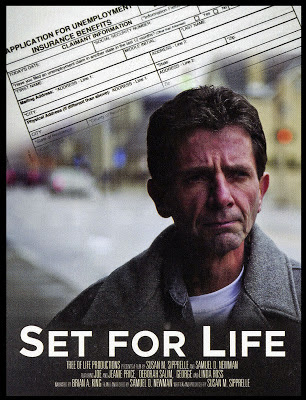 "Ageism is alive and well . . . " According to statistics put forth by SET FOR LIFE, a compelling, award-winning documentary that delves into the stark realities of Baby Boomers who are faced with the trickle-down effects of the faltering U.S. economy, the unemployment rate for workers 50 years of age and older is worse than it was during the Great Depression. While the national job report numbers appear to be improving every month (on paper), negative trends for older workers are not reversing.  It takes, on average, 14 months or longer for older workers to find new employment - if they can find work at all.

SET FOR LIFE fleshes out the personal stories behind these statistics to great effect. Between 2010 and 2012, Susan Sipprelle and Samuel Newman of Tree of Life Productions traveled around the United States and documented the stories of 100 unemployed Americans, 50 years of age and older.  (These interviews can be viewed on the "Over 50 and Out of Work" project website. Link HERE)

The related documentary, SET FOR LIFE, follows, in depth and with compassion, the lives of three Baby Boomers who have been thrust into unemployment and forced to face the erasure of their American Dream. Each story brings into focus exacerbated personal hardships, struggles and downsized expectations, where those out of work submit hundreds of resumes, often for jobs beyond/beneath the scope of their expertise, while house payments cannot be met, health insurance lapses and retirement benefits are cashed in.

One case study revolves around a 52 year-old husband, a third generation steelworker and cancer-survivor in West Virginia, who, after a twenty-five year history of being laid-off and rehired, must choose between the continued cycle of working intermittently at the mill or pursuing another line of work, which offers more steady employment.
Another thread of the film follows the decisions made by a 60 year-old, single woman in South Carolina who is laid off as a college records officer due to "federal and state cutbacks" and becomes dependent on her sons to help pay her mortgage, put food on the table, etc. Can a part-time job she finally lands as a grant researcher for a non-profit organization--that barely pays minimum wage--prove enough to make ends meet?

The most moving story of the trio is that of a 58 year-old I.T. Specialist in California whose high-tech professional life goes belly up around the same time his son, a young father of two children, returns home from active military duty as a double amputee and now depends on the help, care and support of his extended family.

Sipprelle and Newman have created an important, engaging documentary that addresses the personal perils of a national crisis. This situation may become even more grave if and when the eligibility age for Social Security benefits is raised. The film asks viewers to contemplate larger questions of self-worth, resilience and the necessity for change and reinvention in the midst of an uncertain world.

To watch the trailer for SET FOR LIFE, link HERE

Posted by Kathleen Gerard at 3:32 PM

Vanity Fare: A novel of lattes, literature, and love 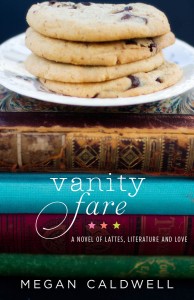 Molly Hagan is a struggling, forty-year-old single mother who lives in Brooklyn, New York. She suffers the sting of a husband who left her for a younger woman; a traumatized six-year old son who asks too many questions and is begging for an exotic pet; a mother who's financial future has gone belly-up and now has nowhere to live; and well-meaning friends and a shrink who pressure Molly to make changes in her life. Molly's troubles grow even deeper when she learns that she's penniless and can't even pay the rent.

When an old friend offers Molly a copyrighting job for a new bakery, Molly jumps at the chance for employment. The venue is located near the New York Public Library and the owner wants to make the bakery "a destination point, just like the library." Inspired by the challenge, Molly comes up with a "literary-food-is-delicious" schematic for what she envisions will become, "Vanity Fare." In the midst of pulling together her presentation, Molly suddenly finds herself being wooed by a sexy British pastry chef with an "upper-crust, devil-may-care Hugh Grant accent" and his aloof business partner, who becomes more attractive as he forms a bond with Molly's son.

Each chapter commences with blurbs that cleverly pair a syrupy literary reference/pun with a bakery offering such as "Much Ado about Muffins," "A Room of One's Scone" and "Catcher in the Rye Bread." Author Megan Caldwell has whipped up a delicious, well-plotted romance where her smart, self-deprecating heroine conquers real-world issues with good humor.

Please note: This review is a reprint and is being posted (in a slightly different form) with the permission of Shelf Awareness. To read this review on Shelf Awareness: Reader's Edition (1/9/13), click HERE.

Posted by Kathleen Gerard at 11:10 AM