Plant a seed of gratitude to harvest new hope

To read the article in its entirety, click on the highlighted title above 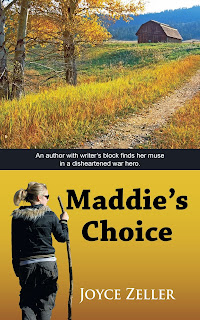 Newly single, native New Yorker, Maddie Taylor is a romance writer stuck in the throes of a writers' block when she receives news that Jonah Spartman, an older man she met by chance ten years before, has bequeathed her half of his cattle ranch in Arkansas. The land can be hers, but only under the condition that she stay on the ranch for a period of three months.
Eager for a change of scene, Maddie heads west, where she meets Gideon Spartman, Jonah's grumpy grandson, a man with rugged good looks, who owns the other half of the ranch. Gideon is a troubled Afghanistan military vet who struggles with Post Traumatic Stress Disorder (PTSD). He has also become the guardian of his two, lonely orphaned nephews, Abe and Mark, whom he orders around like "hired help." Even though Gideon is initially leery and standoffish with Maddie, the two are instantly attracted to each other.
Do the secrets and scars that Gideon carries prohibit him from loving another person? And does the same hold true for Maddie and her life of isolation, lived on the pages of her romance novels?
As prideful Maddie tries to settle in to the Spartman Cattle ranch, she starts writing again, while growing closer to Abe and Mark and making friends with the townsfolk.
With yearnings suddenly awakened in Maddie for Gideon (and vice-versa), the two become fearful, suspecting that the depth of their feelings may be life-changing. But do either one of them really want their lives to change?
Zeller has written an intriguing Western-themed, contemporary love story, blending well-defined, wounded characters--from two different worlds--mired in the pull and tug of romance. Zeller also weaves in a suspenseful subplot regarding the harrowing struggles of a beef cattle farm in financial crisis.

This book has been reviewed as part of a blog tour hosted by Tribute Books. To be entered to win a $25 Amazon.com Gift Card (or PayPal cash), link HERE

All Aboard: Riding the Rails in Fiction

For many of us, trains are fascinating: cargo and passenger trains, subways, high-speed rail. The call of a train whistle--the rumbling, chugging sound--awakens the spirit and encourages the imagination to crisscross time and place. That's what inspired me to write In Transit, a woman-in-jeopardy novel published two years ago. It's the story of a misguided, rookie NYPD transit cop assigned to the labyrinthine New York City subway system and how, when she falls in love with the wrong man, her life derails.

In Trains and Lovers by Alexander McCall Smith, four travelers, diverse in backgrounds and ages, are brought together on a train bound from Edinburgh to London. They pass the time by telling tales of how the railroad played a significant part in each of their love lives.

Orphan Train by Christina Baker Kline is a coming-of-age novel that connects the disparate lives of two women. The story is based on the program that, from the 19th century until the Great Depression, carted orphans via train to adoptive families in the Midwest.

Pandemonium infuses Mrs. Queen Takes the Train. In William Kuhn's clever, inventive novel, Queen Elizabeth gets fed up with the demands of life at Buckingham Palace, slips on a borrowed hoodie and goes rogue, taking public rail transportation to Scotland.

The Train of Small Mercies, a collection of short stories by David Rowell, links the poignant, personal experiences of six ordinary people who witness and grieve as the train carrying the body of Robert F. Kennedy from New York City to his final resting place in Washington, D.C.

The idea of riding the rails conjures romance, intrigue and drama as trains take us on collective and individual journeys--both on the page and off.

NOTE: This article is a reprint and is being posted (in a slightly different form) with the permission of Shelf Awareness. To read this column as published via Shelf Awareness for Readers (11/5/13), link HERE