Peace at the Edge of Uncertainty 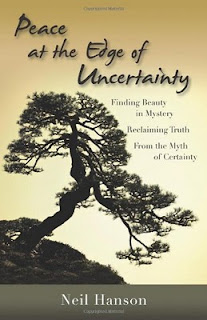 When his father suffers a reaction to medication, an adult son is called home to Kansas City.  The son arrives and discovers that his father is in a coma and life support intervention is keeping him alive.

In Peace at the Edge of Uncertainty, Neil Hanson has written a stream-of-consciousness, non-fiction meditation on what it means to sit vigil in a hospital ICU and ruminate about the relationship he shared with a troubled, emotionally distant father.

Hanson structures the narrative in the form of a heartfelt letter to his father, written 15 years after his death, where he gives witness to his father's last days. The letter concept eventually strays far from the original intent and evolves into something of a philosophical epistle on the nature and meaning of life and death, as well as the tug toward tying up loose ends via forgiveness and reconciliation. Hanson is a bright, learned man, a do-it-yourself spiritualist, who is not an advocate of "organized" religion - although he ties in different religious traditions including Judaic, Christian and New Age. Throughout, Hanson grapples with his faith, which is steeped in a mystical, out-of-body experience from his teenage years.

The book is slight on specific scenes that anchor the relationship of this father and son, but Hanson writes poetic passages that ambitiously try to give voice to the depth of his feelings. It is touching, yet bittersweet, that Hanson felt closest to his father during his dad's final exit from the world.

In the epilogue of this brief book, Hanson writes, "My life is no different from the life of anyone else . . . " Nothing could be further from the truth. The transformation that Hanson undergoes in his father's final days is extraordinary. He is touched by ethereal graces that enable him to experience, with great euphoria, divine presence(s) in the form of lights, angels and singing choirs. How many--believers or not--can make such claims? And while the gift of divine presence is what abides and sustains Hanson as he continues on his spiritual journey, the reader is left with many questions . . . but perhaps that is the point.

NOTE: In order to write this review, I received a copy of this book from Tribute Books (a book blog tour company)
Posted by Kathleen Gerard at 12:00 AM

Believing Is Seeing: Observations on the Mysteries of Photography 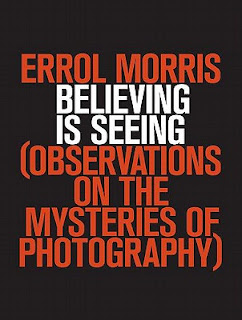 Academy Award-winning documentarian filmmaker, Errol Morris (Tabloid, The Thin Blue Line), brings a unique perspective to Believing Is Seeing: Observations on the Mysteries of Photography--his first book, a collection of essays--which investigates the relationship between photographs and reality.
Significant to the text are two childhood experiences that deeply affected Morris. His father died when he was very young, and Morris would only come to know him (later) through studying photographic images of him. Morris also suffered an eye ailment, which ultimately altered his visual perceptions. Thus, an inquisitive, skeptical visual philosopher emerged. Therefore, it is no wonder that Morris has undertaken a forensic examination that explores how photographs have the power to reveal and conceal and thereby, convey certain truths and frauds.
Morris dissects notable documentary photographs - a photograph of three children discovered in the hand of a unknown soldier in Gettysburg; cannonballs on a landscape during the Crimean War; children's toys photographed amid the rubble of the Israeli-Lebanese War; and the iconic image of the hooded man that emerged from Abu Ghraib, among others.
This book offers an observant, in-depth exploration that probes the visual sincerity and veracity of notable photographs. It delves into the intentions of a photographer in relation to images themselves; how photography can be manipulated and used as propaganda; how words that accompany a photograph can change visual context; and even how photographs can serve as a source of memory. It is with fascinating insight that Morris thoroughly investigates and interviews experts in the visual arts, as if putting each notable photographic specimen on trial and encouraging readers to ultimately render their own verdicts.
Believing is Seeing: Observations on the Mysteries of Photography by Errol Morris
The Penguin Press, $40.00, Hardcover, 978-1594203015, 336 pp.
Publication Date: September 1, 2011
To order this book via INDIEBOUND link HERE
Please note: This review is a reprint and is being posted with the permission of Shelf Awareness. To read this review on Shelf Awareness: Reader's Edition (9/2/11), click HERE.
Posted by Kathleen Gerard at 12:00 AM