Novels about the study of bones and human remains in relationship to crime solving continue to fascinate and entertain readers - and top best seller lists. On the page or in real life, forensic scientists, those who perform chemical and physical analyses of evidence submitted by law enforcement officials, are crucial in piecing together a cohesive storyline between victims and suspects.
A host of contemporary authors are currently spinning tales about the role and lifestyles of forensic scientists:

Kathy Reichs, who is, herself, a practicing forensic anthropologist, has emerged as the leader of the pack. Her popular thrillers (Flash and Bones, Spider Bones) are filled with stories culled from her own work experience. Dr. Temperance Brennan, Reichs' protagonist and alter-ego, is a highly skilled forensic anthropologist who works at the Jeffersonian Institute in Washington, D.C. and writes novels on the side. Reichs's series has even inspired the long-running FOX-TV show, Bones.
Thorough scientific research gives credence and authenticity to books in this mystery and thriller sub-genre. Multi-faceted protagonists, often women faced with complex personal lives, add an additional level of engagement to these intricately plotted novels of suspense.

In The House at Sea's End by Elly Griffiths, forensic archeologist and college professor Ruth Galloway lends her expertise to the discovery of a mass grave of skeletal remains found on Britain's Norwalk Beach. In this second novel featuring Galloway, secrets are unearthed that may stem from World War II. Readers become embroiled in a plot that may hold deadly consequences, while they are also swept up in the intricacies of Galloway's personal life. She struggles to juggle the demands of her job and the investigation, her life as a single mother and a secret intimate liaison with married DCI (Detective Chief Inspector) Harry Nelson. 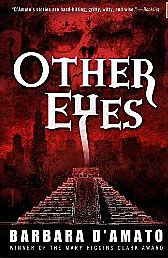 Other Eyes, a carefully structured, stand-alone forensic mystery by Chicago-based writer, Barbara D'Amato, features Blue Eriksen, a divorced single mother and a noted Northwestern University forensic archeologist. In this novel, Blue and her team travel the globe, studying and testing mummies in ancient cultures and religions seeking to identify a scientific compound that may actually cure people of drug addictions. Their work is suddenly deemed as a threat, and Blue becomes stalked by an assassin who may be working for a powerful drug cartel.
Note: This article is a reprint and is being posted with the permission of Shelf Awareness. To read this piece (in a slightly shorter form) as published on Shelf Awareness for Readers (3/13/12), link HERE
Posted by Kathleen Gerard at 5:08 PM

The Dog That Talked to God 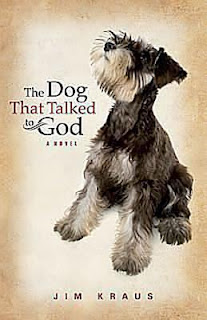 How does a person of faith go on living after tragedy strikes? This is the major question facing 43 year-old, recently widowed, burned-out novelist, Mary Fassler in The Dog That Talked to God by Jim Kraus (The Silence). Disillusioned by the platitudes offered by well-meaning friends and family in an effort to ease her inconsolable grief, Mary--shaken, lost and confused--decides to adopt Rufus, a Schnauzer puppy, in the hope he will offer her companionship. During their daily walks through the suburbs of Chicago, Mary talks to Rufus, railing against a God from whom she feels estranged and abandoned while trying to make sense of a past she can't let go of and the prospect of a lonely, uncertain future. One day, Rufus unexpectedly talks back to Mary and informs her that he is in regular communication with The Almighty. When he begins to relay messages from God, Mary begins to pine less and listen more.

Rufus becomes the impetus for Mary to reconcile her life. This dog-savior scenario is plausible because Rufus is a lovable, quirky, gentle soul, and Mary's philosophical, humorous, and refreshingly honest narrative buoys an otherwise heartbreaking predicament. As Mary interacts with family, friends, her literary agent and new love interests, her unwitting spiritual recovery propels her to pack up and set off, with Rufus, on a pilgrimage in search of a whole new life. Kraus's novel is an entertaining, deeply engrossing portrait of what it means to be fully human and fully alive.

Please note: This review is a reprint and is being posted (in a slightly different form) with the permission of Shelf Awareness. To read this review on Shelf Awareness: Reader's Edition (3/9/12), click HERE.
Posted by Kathleen Gerard at 12:00 AM