We Only Know So Much 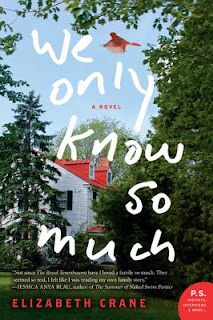 On the surface, the Copelands might appear a typical American family that lives in a small, Midwestern town. But in the hands of author Elizabeth Crane (When the Messenger is Hot) their worlds are skewed by the intrusive absurdity and cruelty of life in the novel, We Only Know So Much. Thus, the family members are challenged by things they don't understand. The mother is numb from the suicide of her secret lover. Her unaware husband, a walking Wikipedia, fears he might be losing his memory. Their daughter, an angst-ridden 19 year-old, longs for a "career" on reality TV. And their 9 year-old son is convinced he must choose between his love of crossword puzzles and girls. Add a grandfather suffering the tangled forgetfulness of Parkinson's disease and his mother, a 98 year-old matriarch whose sharp, keen mind enables her to still dream big, and what emerges is an eccentric cast of characters whose lives are rife with conflict.

Crane is an accomplished, prolific short story writer. In this, her debut novel, she makes painful issues accessible via a clever, original narrative voice that allows the reader to peek inside the head and heart of each character. By accentuating the offbeat flaws and failures of those who populate the novel, Crane reveals a dark, yet endearing sense of humanity as the individual and collective stories unwind at a descriptive, unhurried pace. In the end, the "ordinary" aspects of living life, however dysfunctional, escalate until the novel reaches thought-provoking conclusions about the meaning of life.

Please note: This review is a reprint and is being posted (in a slightly different form) with the permission of Shelf Awareness. To read this review on Shelf Awareness: Reader's Edition (6/22/12), click HERE. 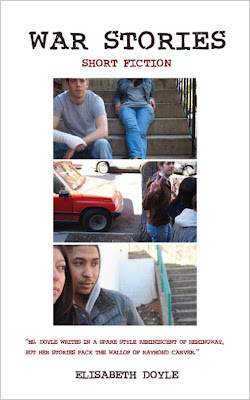 Life is a battlefield in War Stories, a riveting collection of short fiction by Elisabeth Doyle. Each story delves deeply into the experiences of American soldiers, the physically and emotionally wounded (and those who love them) as they struggle to survive and fulfill the demands of civilian life.

Half of the stories deal with the idea of soldiers in the literal, military sense of the word:

Rebelliousness is at the heart of "Recruiters," a story about a farewell rendezvous for a young friend heading for boot camp that goes dreadfully wrong.

In "One of These Days It Will All Be Over," a man returns home from war and admits to his wife, "I'm not the same man...I'm nothing now...How can God love me?" But the simple act of going to pick up his children one day offers him an unexpected moment of transcendence.

"Pistolesi," a story about resilience, is told from the point of view of a young war wife and mother whose severely injured husband returns home from combat steeped in a severe depression. In order to pay the bills, the wife takes a job as a baby photographer and becomes enlightened by what it means to fight for the things that give life meaning.

"Driving" depicts how the terrifying prospect of combat is overcome for a young couple by taking car rides together.

And in "The Deepest, Darkest Part of the Woods," a numb veteran returns home unable to move past a chilling atrocity of war that keeps him a spectator to his own life. But the presence of a neighbor and the remembrance of a compelling dream offers a sense of renewed perspective.

The rest of the stories deal with secondary soldiers - those struggling to move on and reinvent their lives beyond the personal grief and anguish inflicted by the ripple-down effects of war:

In "Median," a highway car crash is the impetus that forces the father of a war hero to come face to face with the past.

"Passengers" is a harrowing story about a mother whose son was unable to cope with life after war and how she finds herself caught up in a life and death battle of her own.

Aimlessness, isolation, guilt, detachment and love are common threads that bind these nine sparse, yet richly drawn stories. With great perception and insight, Doyle focuses on chilling facts and small moments that give emotional heft to the interior landscapes of these traumatized, fully realized characters.

War Stories is currently under consideration for The Story Prize (2012).  To read more about Elisabeth Doyle and her writing process link HERE.

Note: This book was provided for review by Tribute Books, as part of a hosted book blog tour. 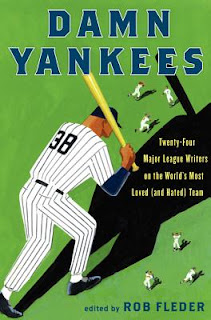 The New York Yankees have come to symbolize "everything good and strong and true about baseball and America and the human race in general. Either that, or avarice and unrepentant evil," writes Rob Fleder (former Executive Editor of Sports Illustrated) in the introduction to Damn Yankees: Twenty-Four Major League Writers on the World's Most Loved (and Hated) Team. In this collection of diverse, original essays, an all-star lineup of writers from the fields of sports (Tom Verducci, Sally Jenkins from Sports Illustrated), literature (Nathaniel Rich, novelist) and  finance (James Surowiecki, The New Yorker) share their own unique feelings and experiences about this quintessential sports dynasty.

The array of pieces resonate with immortals, legacies and personal stories. Some are crafted with lyricism and sensitivity and a select few showcase conflicted feelings by blending a mixture of back-handed compliments with tongue-in-cheek and a bone-to-pick tone. Passion and insight fuel each essay and shed light into the historical Yankees from the Babe, Mantle and DiMaggio to Derek Jeter; the price of wearing the pinstripes and winning at all costs; rivalries and the grueling duels between teams, players and fans; and the foibles and scandals that have rocked the team. Other essays explore the more human side of the game including a visit with Catfish Hunter in his final days; the story of Jim Abbott (Rick Telander, Chicago Sun-Times), a one-handed pitcher whose rise to fame was snuffed out by the 1994 Baseball Strike; and how rooting for or against the Yankees can transcend generations (J.R. Moehringer, memoirist) and continents (Colum McCann, novelist).

The essays, as a whole, render a multi-faceted portrait of the New York Yankees and why the team evokes such strong, often polarized, feelings. The book is capped by a section that offers facts, figures and statistics which support the many reasons why the Yanks--whether revered or loathed--are considered an American institution and a symbol of greatness.

Please note: This review is a reprint and is being posted (in a slightly different form) with the permission of Shelf Awareness. To read this review on Shelf Awareness: Reader's Edition (4/13/12), click HERE. 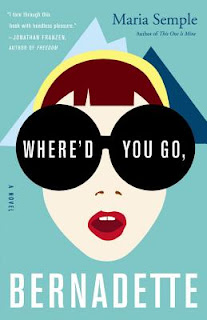 If she aces her report card, precocious Bee Branch, the 15-year-old narrator of Maria Semple's Where'd You Go, Bernadette, is promised a trip by her over-the-top, over-achieving parents. But when Bee--an only child, born with heart problems--makes perfect grades and picks Antarctica as the family destination, all hell breaks loose.


Bee's mother, Bernadette Fox, a once-renowned architect, has been in an anxious, emotional funk for years that has forced her to outsource the minutiae of her life (at a rate of 75 cents per hour) to a woman in India. It doesn't help matters that Bee's father, Elgin Branch, a workaholic bigwig at Microsoft, uprooted the family from Los Angeles to Seattle, a city Bernadette feels has "zero architectural integrity," is filled with "the slowest drivers you ever saw" and has become overrun with tourists and overly compassionate do-gooders. Add a meddling, Seattle-born secretary at Microsoft and a neighbor obsessed with destroying Bernadette because she views her as rude and antisocial, and what emerges is an acerbic, dark, satirical comedy. The day before the family's departure, Bernadette, who is dreading the South Pole vacation, disappears. Amid the search, surprising discoveries are made and bombshells are dropped.


Semple (This One Is Mine) was once a writer for the TV programs, Arrested Development and Mad About You.  She stitches together this funny, inventive story via e-mails, letters, FBI reports, magazine articles and interspersed narrative passages told in Bee's voice. This fresh, original dramatic structure brings levity to harrowing and complex domestic issues.

Please note: This review is a reprint and is being posted (in a slightly different form) with the permission of Shelf Awareness. To read this review on Shelf Awareness: Reader's Edition (8/17/12), click HERE.