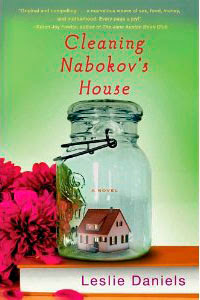 What does the cover of this book say to you?  It's part of what intrigued me and led me to it...

Love and longing (and fondly remembering) a missing, deceased father is what anchors Barbara Barrett back to the world and her life when this divorced mother of two is deemed by a court as "psychologically unstable" to care for her children. In Cleaning Nabokov's House, Leslie Daniels has written a uniquely original debut novel that transcends grief and breathes levity (and often, unbelievable) satirical absurdity into a story that might have, in less clever creative hands, flat-lined into melodrama.

When the book opens, the reader joins Barbara's story after the court order has been handed down, and she is scrambling to pick up the pieces of her shattered life and figure out a way to get her children back. Barbara, originally a Manhattanite, feels like an outcast since moving to her ex's (and now also her children's) hometown of Onkwedo, New York (a fictionalized version of Oneida). She feels stuck in a rut. Her lackluster job at a small dairy, writing response letters to disgruntled ice cream consumers and the like, isn't much help either. But her luck suddenly changes when she moves into a house once inhabited by the great Vladimir Nabokov, the author of the seductive classic, Lolita. Tucked behind a false wall in the house, she discovers a manuscript she believes is an unpublished masterpiece written by Nabokov himself about Babe Ruth...of all people.  Could having the novel authenticated and getting it published serve as a winning lottery ticket to fulfill Barbara's quest? It is this discovery, along with a cast of equally quirky and absorbing characters, that ultimately empowers Barbara to reinvent her life in often laugh-out-loud ways that she, and the reader, could never have imagined.

Opinion: Things I Remember About Dad
Friday, June 17, 2011
Opinion/Editorial Section (page 23)
BY KATHLEEN GERARD
The Record
To read the op-ed in its entirety, click on the highlighted article title above
Posted by Kathleen Gerard at 1:38 PM 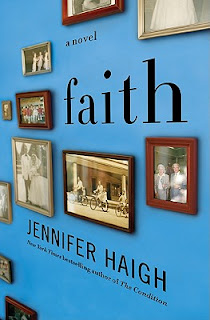 Faith by Jennifer Haigh is a novel that reads like a fictional memoir. Father Art, a respected and lauded Catholic parish priest in Boston was accused amid the pedophilia scandal in 2002. Sheila, Father Art's step-sister, is an all-knowing narrator who tells the story much like Nick Carraway in The Great Gatsby - by standing on the periphery of the larger story. From the outset, she spells out her intent to shed light on the facts that implicated her step-brother in the alleged abuse of an 8 year-old boy. This leads to a novel well-structured in three parts and told largely in flashbacks. Part one details how and why Art became a priest. Part two delves into the ramifications of Art's life in the priesthood and what led to the scandal. And part three unravels the story, exposing how the scandal that plagued Art rocked his life and the lives of every member of a rather old-school, Irish-Catholic family.

Jennifer Haigh embroils her characters in a moral dilemma and renders them with great sensitivity and compassion. For every flaw revealed, Haigh presents a plausible justification that ultimately exposes redeeming qualities - in everyone. Haigh's writing--the straight prose and the pivotal scenes--is beautifully nuanced, and she made me care and feel for these people . . . Art, a truly faith-filled, yet isolated, man, who gave 25 years of his life to his church only to have that church betray him; Sheila, unwavering in her belief in her step-brother's innocence, but not without regret and sorrow; Mike, who convicts his step-brother from the get-go but who goes to great lengths to ultimately form his own conclusion; and the now elderly matriarch and patriarch of the family, who are steeped in denial - perhaps with good reason.

These characterizations, coupled with a plot that is hinged on discoveries and epiphanies that culminate toward the end of the narrative, ultimately deliver a suspenseful book that is fascinating in both its presentation and portrayal.

In order to write this review, I received a copy of this book via TLC Book Tours in conjuction with HarperCollins Publishers.
Posted by Kathleen Gerard at 9:48 AM