NOTE: This interview is a reprint and is being published with the permission of Shelf Awareness. To read this Q&A as originally published on Shelf Awareness for Readers (11/11/16) click HERE
Posted by Kathleen Gerard at 1:24 PM 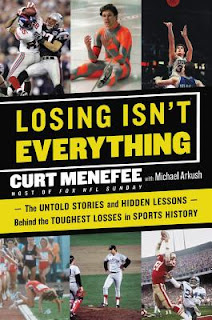 Riveting stories that document pivotal career losses that changed the lives of athletes with applicable lessons for everyone!

Host of Fox NFL Sunday Curt Menefee and co-writer Michael Arkush (Rush!) present an in-depth examination of pivotal instants in the lives of 15 athletes, coaches and managers who have been on the losing side of memorable moments in sports.

Menefee and Arkush profile a range of familiar names and incidents: Boston Red Sox pitcher Calvin Schiraldi gave up the final game of the 1986 World Series to the New York Mets. Craig Ehlo of the Cleveland Cavaliers allowed Michael Jordan of the Chicago Bulls to score the winning shot in the '89 NBA playoffs. Lou Michaels, a placekicker from the Baltimore Colts, missed a field goal that cost the team the '69 Super Bowl. Snowboarder Lindsey Jacobellis made a split-second decision at the finish line of the 2006 Winter Olympics that banished her from gold. In the fourth round of the 1991 U.S. Open, Aaron Krickstein played his heart out against veteran tennis icon Jimmy Connors, but it wasn't enough. With one strike away from winning the 2011 World Series, Ron Washington, manager of the Texas Rangers, made a fateful decision. Underdog French golfer, Jean Van de Velde choked in the home stretch of the 1990 British Open. And runner Mary Decker literally fell short at the 1984 Olympic Games.

Every riveting, heartrending profile offers a well-chronicled history into events that led up to the dramatic moment that changed everything, along with a fascinating analysis of how each affected athlete sorted through complicated emotions and moved on--or didn't--after the fact.

Losing Isn't Everything: The Untold Stories and Hidden Lessons Behind the Toughest Losses in Sports History by Curt Menefee, with Michael Arkush
Dey Street Books (Harper Collins), $26.99 Hardcover, 9780062440075, 272 pages
Publication Date: November 1, 2016
To Order this book on INDIEBOUND click HERE
NOTE: This review is a reprint and is being posted with the permission of Shelf Awareness. To read this review on Shelf Awareness: Reader's Edition (November 11, 2016 ), link HERE
Posted by Kathleen Gerard at 1:23 PM

Murder at the Moonshine Inn 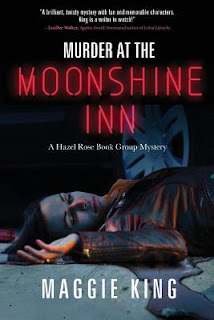 When Murder at the Moonshine Inn opens, readers learn that it's been eight years since Hazel Rose--a computer programmer turned romance novelist and super-sleuth--solved the murder of a disgruntled Richmond, Va. book club member who died after sipping cyanide-laced tea at a book club discussion.

In this second installment, Hazel goes undercover to find out who killed Roxanne Howard, a willful and high-powered executive, in the parking lot of a local redneck watering hole. Roxanne's grief-stricken sister enlists Hazel's help to find the killer as Roxanne's husband, Brad, is actually Hazel's distant cousin—and he also becomes the prime suspect in his wife's murder.

As Hazel gets drawn deeper into the mystery--and enlists the help of her shrewd, clever, mystery-loving book club cohorts--more complications ensue that involve Hazel's distant relatives and a long list of possible suspects ranging from Roxanne's rivals to former employees.

Hazel's fifth husband, a retired Richmond homicide detective who is a writer of true crime books, offers Hazel pertinent information into the investigation that aids her quest to flush out the murderer. What was the motive—love or money...or maybe revenge? When a second murder occurs, red herrings thwart Hazel's investigation until her own safety comes at risk.

King (Murder at the Book Group) delivers another well-written, suspenseful cozy filled with a charming, quirky cast of book-loving characters and a plot that tightens before it ultimately unspools into a surprising conclusion.