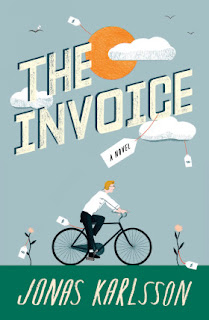 In this thought-provoking existential comedy, a lowly video store clerk receives an astronomical bill for simply living his life.

The absurdities of life coupled with the strangely surreal are hallmarks of Swedish actor and playwright Jonas Karlsson's work (The Room). His second novel, The Invoice, again turns on a Kafkaesque premise: a nameless, 39-year-old part-time video store clerk and film aficionado--a loner with only a handful of friends, whose most notable indulgence in life is having a pizza and taking in a movie in his one-room Stockholm apartment--receives a bill for 5.7 million kronor (roughly $875,000) in the mail. Thinking the bill--imprinted with a nondescript logo--is a mistake or a scam, the narrator disregards it. The next month, he receives another bill in the same amount, but with a surcharge of 150 kronor tacked on as a late payment. When the narrator calls to inquire, he makes matters worse as it is soon discovered that he owes even more than originally calculated. "What am I supposed to be paying for?" the narrator asks. "Everything," says the representative. "Being alive costs."

Through a cryptic, engrossing storyline that snowballs with staggering, thought-provoking complications, Karlsson reveals more about his underachieving hero. It seems contradictory that the hefty "happiness tax" in the whole country should be imposed upon someone living such a simple life. Fair or not, this leaves the narrator to scramble for deductions in the form of disclosures about free-floating anxiety, missing his parents and the loss of a secret love. The satirical, philosophical nature of this story delves into the meaning and purpose of life, how we measure joy and what truly constitutes a sense of accomplishment.

Note: This review is a reprint and is being posted with the permission of Shelf Awareness. To read the review on Shelf Awareness: Reader's Edition (7/15/16), link HERE

This review was also published in a longer form on Shelf Awareness for the Book Trade (6/20/2016). To read the longer form review, link HERE
Posted by Kathleen Gerard at 12:17 PM 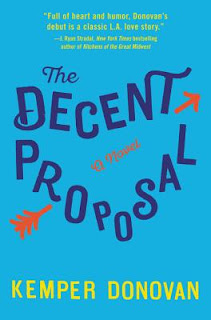 Two strangers are brought together by a mysterious benefactor who offers them a chance--with conditions--to split a million dollars.

Los Angeles is the backdrop for Kemper Donovan's smart and observant first novel, The Decent Proposal, which asks, what would two people do for a million dollars? Sex is not part of this proposition. Rather, a mysterious, anonymous benefactor hires a lawyer to bring together two strangers, promising that they can split $1 million if they agree to spend at least two continuous hours with each other--engaging in substantial conversation--every week, for one year.

Richard Baumbach is a good-looking, down-on-his-luck film producer. Richard's best friend is Michaela (aka "Mike"), a hardworking literary manager. In college, they were a couple, but Mike ended their romance. Once Mike gets wind of Richard's moneymaking opportunity--the DP, as the "decent proposal" is called--the scenario suddenly frames Richard in a new light. Is Mike actually in love with Richard after all?

Elizabeth Santiago is the other half of the DP and the antithesis of Richard: she doesn't watch TV; she's not even on Facebook. On the fast track to partnership at her high-powered law firm, Elizabeth doesn't need the money. A loner who lives to work, she has forsaken her family and their devout Catholic faith. The DP offers Elizabeth a perfect opportunity to step outside her comfort zone.

A strong, omniscient narrator anchors Donovan's deconstructed, opposites-attract love story where emotional stakes deepen as the story unfolds. References to pop culture, classic literature and movies--along with snappy dialogue and well-drawn characterizations, especially in the cast of supporting players--infuse a clever plot filled with surprising twists that will keep readers entertained and in suspense.

Note: This review is a reprint and is being posted with the permission of Shelf Awareness. To read the review on Shelf Awareness: Reader's Edition (4/15/16), link HERE

This review was also published in a longer form on Shelf Awareness for the Book Trade (3/14/16). To read the longer form review, link HERE
Posted by Kathleen Gerard at 12:04 AM

We Could Be Beautiful 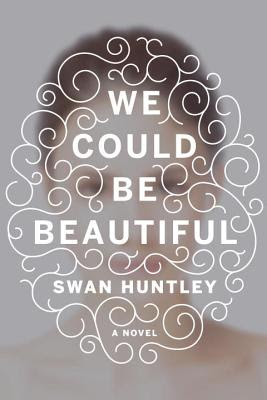 A wealthy single woman falls hard for a handsome, charismatic and attentive older man who may--or may not--be harboring secrets.

Swan Huntley intimately explores the psyche of a 43-year-old, still single, affluent New Yorker in her first novel, We Could Be Beautiful. Despite her success as the owner of an upscale handmade stationery shop, Catherine West feels terribly incomplete, like a failure, until she meets handsome and striking William Stockton, a widower and independently wealthy investment banker in his 50s, at an art gallery opening. "There was something familiar about him," Catherine says of their first encounter. They learn they share a love of fine art and a history--they come from the same privileged societal class, and their parents had been friends years earlier.

When Catherine tells her mother, Elizabeth, about William, and inquires as to what she might remember about him and his family, her mother's curt, agitated response is jarring. Catherine blames her reaction on her Alzheimer's, and William later admits that Elizabeth might be remembering that, as a boy, he was once a guest in their home and broke an expensive vase. The explanation seems plausible as William and Catherine move in together and begin planning their wedding. However, their blissful romance is marred once Catherine discovers an old diary her mother kept and a letter from a former nanny, which may shed light into Elizabeth's troubled reaction to William.

Deception and greed are suspenseful undercurrents that propel this well-plotted, seductive psychological thriller. Huntley has created a riveting heroine in whom readers will eagerly invest as she is forced to unravel the truth about a man who seems too good to be true and a shrouded past that may hold the key to her future.

Note: This review is a reprint and is being posted (in a slightly different form) with the permission of Shelf Awareness. To read this review on Shelf Awareness: Reader's Edition (6/24/16), link HERE

Posted by Kathleen Gerard at 3:42 PM