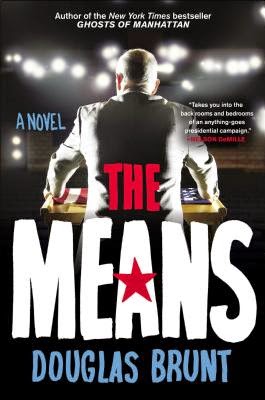 Douglas Brunt (Ghosts of Manhattan) brings readers deep into the competitive world of multimedia journalism as it intersects with the hard-boiled grit of politics. Spanning four years and various U.S. locales, The Means braids together three distinct points of view to form a compelling, complex plot that unspools gradually, deepening the mystery at the center of the book.

Samantha Davis, a former child actress, is smart, beautiful and ambitious. Now a lawyer, she's hired as a national TV news reporter. As she learns the ropes, often the hard way, she pursues an evolving news story concerning the upcoming presidential election that raises her profile and tests her integrity.

Tom Pauley is a handsome, North Carolina defense attorney. After he wins a controversial trial, the well-liked, middle-class fiscal conservative is tapped by the GOP to make a run for governor. Might his popularity and appealing poll numbers encourage him to set his sights on the White House?

Mitchell Mason is a study in personal and professional contradiction: ruthless one minute, caring and sensitive the next. He's a brash, headstrong Democrat serving as president in a post-Obama America. A scandal from his past, however, suddenly threatens to put his re-election bid in peril.

Brunt is meticulous and detailed-oriented. His finely tuned novel is crafted via cinematic scenes, rich in dialogue, that authentically reveal the trappings and snares of power, ambition and human nature. The corrosion of the U.S. political system--on both sides of the aisle--is at the heart of this engrossing, seductive political thriller served with a twist.

Note: This review is a reprint and is being posted (in a slightly different form) with the permission of Shelf Awareness. To read this review on Shelf Awareness: Reader's Edition (9/23/14), click HERE