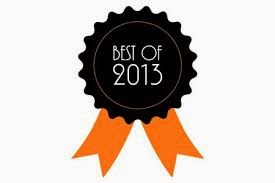 As a book reviewer for Shelf Awareness, I read and review at least three titles per month. Those titles are culled from an often eclectic list of nonfiction and fiction (mysteries and romances) - books I might not normally choose for myself, per se, but titles I have enjoyed reading that broaden my range. This blog tends to highlight a majority of those titles. However, I read a lot more than what I post on this blog.

Below is a list of my favorite reads from 2013. Please note: there is no special ranking. Each book is vastly different in content, form, tone and subject matter, and I feel it is unfair to qualify them in that manner. The numbers are simply there to keep the list orderly.

To learn more about any of the selections, click on the highlighted titles for additional information:

11)    This is the Story of a Happy Marriage by Ann Patchett
12)    Saltscapes: The Kite Aerial Photography of Cris Benton by Cris Benton
13)    Killing Jesus: A History by Bill O'Reilly and Martin Dugard
14)    Things that Matter: Three Decades of Passions, Pastimes and Politics
by Charles Krauthammer
15)    The Kid: The Immortal Life of Ted Williams by Ben Bradlee

Posted by Kathleen Gerard at 4:04 PM

The First Phone Call From Heaven 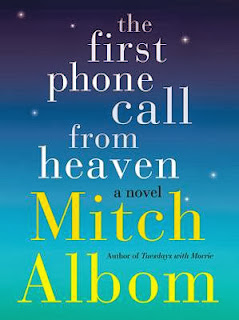 Mitch Albom, the author of The Five People You Meet in Heaven, delivers a novel which questions the idea of life after life.

In The First Phone Call from Heaven, select inhabitants of Coldwater, Michigan start receiving brief, often cryptic, calls from loved ones who have died. Some in the sleepy little town look forward to the calls, taking solace; others find them much too emotional and avoid them. Some choose to keep their conversations secret, but folks like Katherine Yellin—a 46 year-old divorced mother—believe the calls received from her beloved, deceased sister must be shared. When Yellin goes public, others, too, come forward until the mysterious communications from the afterlife grab worldwide media attention, turning Coldwater into a circus-like, pilgrimage destination.


Religious and anti-religious wrestle with the implications, along with skeptics like local resident Sully Harding, a former pilot whose wife died while he was serving prison time. The single father's heartbreaking back-story figures prominently into the suspense of the plot. When Sully's seven-year-old son expresses a longing to receive a call from his own deceased mother, Sully sets out on a quest to prove the phone calls asserting that heaven exists are all a hoax.


Albom's ensemble cast of characters reflects varying attitudes, fears and hopes of people coping with guilt, grief and loss. Interjected throughout the briskly paced narrative are details of Alexander Graham Bell's invention of the telephone, what it meant for his own life and its context in the modern world. Albom's dialogue-driven story culminates near Christmas. The story ultimately becomes a social commentary about human connection, encouraging readers to question the meaning of their own lives, faith and beliefs.

Note: This interview is a reprint and is being posted with the permission of Shelf Awareness. To read this Q&A on Shelf Awareness: Reader's Edition (12/17/13), click HERE

Posted by Kathleen Gerard at 10:08 AM 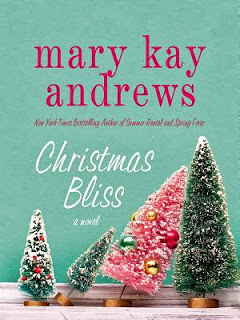 Christmas Bliss is Mary Kay Andrews' fourth installment in the fun and breezy series set in Savannah, Georgia.  You don't need to have read the others novels to enjoy this one, but you're likely to seek out more once you spend time with antique dealer Eloise "Weezie" Foley. Her whirlwind Christmas season seems far from "bliss" as it snowballs with unexpected surprises and secrets.


Weezie is being pulled in many directions as she prepares for her Christmas Eve wedding to long-time beau, Daniel Stipanek, who has set off to New York City to serve as guest chef at a hot new downtown eatery. With Daniel away and Weezie in full impending nuptial mode, Weezie envisions the restaurant owner, Carlotta Donatello, to be "a senior citizen in a flour-dusted apron, wielding a wooden spoon." But when Weezie stumbles upon a gossip column picture that depicts Daniel stepping out on the town with a woman "with a long lustrous mane of hair and huge, long-lashed doe eyes, which, in the photograph were fixed longingly on (Weezie's) fiancé . . . she (also) had a generous helping of cleavage pressed against Daniel's chest," Weezie's life is turned upside-down.

At the urging of BeBe Loudermilk, Weezie's lovable, Southern belle best friend and maid-of-honor—also a commitment-phobe ready to give birth any day—Weezie drops everything and hops a plane to NYC to check up on and nurse Daniel, who comes down with the flu. What ensues are unexpected glitches and adventures for Weezie, who is faced with a clock ticking toward Christmas Eve.

While Weezie faces challenges in New York, BeBe is faced with troubles of her own in Georgia. The past pays the expectant mother a visit, delivering shocking news that forces her to secretly go behind the back of her live-in love, Harry, in order to set matters right.

Rounding out the lively drama are a cast of recurrent, small town characters who enrich the lives of these two women in crises.

In true Mary Kay Andrews' style, she spins yet another clever, charming tale full of laughs and a heartwarming ending that arrives at the eleventh hour.