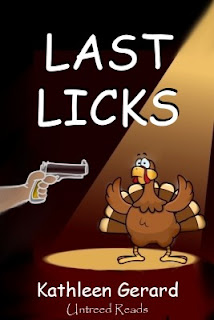 Kings River Life Magazine has featured one of my mystery short stories in their Thanksgiving issue. "Last Licks" is bound to make you sit up and take notice of the potatoes on your Thanksgiving table in a whole new way. The story can be read online for free. See the link below...Enjoy!

"Last Licks" is a featured in the anthology, THE KILLER WORE CRANBERRY (mystery series) published by Untreed Reads.  The book is available for purchase wherever ebooks are sold.

I didn’t know what hit me. All of a sudden there was a thud! and a wet splat! that triggered everything to go flying everywhere—atop the sparkly crystals of the gently swaying chandelier; the steaming gravy boat that sat alongside that big, trussed up bird, half of it carved up on a platter; the beads of sweat rolling down the glass water pitcher; and even onto the cheek of this runny-nosed kid, who was sitting in a highchair across from the scene of the crime. After it happened, there was silence. Nobody moved. Nobody breathed. Every face looked at every other face, pale and stunned. But it wasn’t until one of the tall, wax tapered candles singed and launched a curly ribbon of smoke in its wake, and that snot-nosed kid started crying, that I knew things were bad. Real bad. And here I was, just a few forkfuls away from cleaning up in the betting pool.


It’s a long story that started back when we were surrounded by this oppressive darkness. There was lots of it. The two of us, Spud and me, we had been stuck in a heap for three months, covered by mounds of well-drained, moist-textured soil that smelled of clay and compost. It was a small plot of land tended by folks who had way too much time on their hands and believed in tomorrow. Every morning, noon and night, I could feel their determined footsteps trampling all over us. The ground quaked with their hard work and ambition. The heavier one wore clod-hopper boots whose soles sank into the earth like dull spikes. He got down on his knees and dimly mumbled his prayers aloud while he dug in the dirt until his fingernails turned black...


To continue reading the story, link HERE
Posted by Kathleen Gerard at 10:20 AM

The Dog that Saved Stewart Coolidge 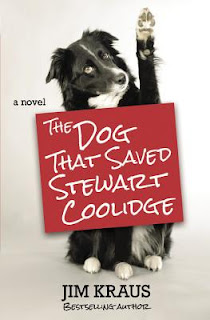 Novelist Jim Kraus has been steadily building a brand writing heartwarming stories that explore the impact domestic animals have on the human experience—and vice-versa. In The Dog that Saved Stewart Coolidge, he crafts a story about twentysomethings struggling to carve out their own niches in the world and how a stray dog brings them together.

The book opens when a loose dog sneaks into the Tops Super Market in the small town of Wellsboro, Pa., and successfully steals a rawhide bone from the pet aisle. When the bone-wielding bandit starts returning regularly to the scene of the crime to make additional heists, Stewart Coolidge, a recent college graduate who can't find a job and works as a grocery store bagger, is enlisted by the store owner to catch the elusive thief. The recurring incidents soon become the talk of the town. Whose dog is it and where did he come from? When a local (and conniving) used car dealer decides to capitalize on the situation--and offers a reward for the dog, which he falsely claims is his own--Stewart, in his quest to wrangle up the stray, joins forces with Lisa, his neighbor, also a recent college grad with journalism ambitions, who works at the local coffee house.

While Stewart tries to capture the renegade dog, Lisa begins to cover the story for the town news. In their pursuit, the two become friends. But will their past heartbreaks and disappointments in life and love keep them from being honest with each other and prevent their friendship from blossoming into romance?

When the vagabond canine criminal, whom Lisa and Stewart come to call Hubert (named after The Patron Saint of Dogs), eventually shows up at the apartment house where Lisa and Stewart live--and Stewart decides to secretly take Hubert in--the dog's presence and his mischievous actions deepen the couple's relationship and things grow even more complicated around town. What repercussions will occur in harboring a four-legged fugitive?

Details of small town life ring with authenticity, along with the stresses young people face in meeting the expectations of others and finding and taking their places in the world while remaining true to themselves. Kraus (The Dog that Talked to God) presents a lovable cast of townsfolk and a suspenseful plot that is ultimately infused with a faith-based message that unites the spiritual themes of this wholesome, feel-good story.

Owls: Our Most Charming Bird 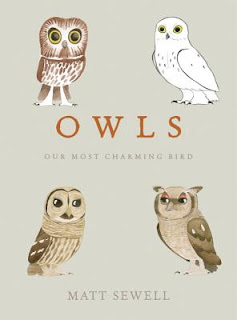 Artist and avid ornithologist, Matt Sewell, has built a brand writing and distinctively illustrating informative, yet accessibly appealing books about birds. In Our Garden Birds and Our Songbirds, he presented two volumes, each exploring 52 favorite species from England—one bird for each week of the year. In Owls: Our Most Charming Bird, Sewell branches out beyond Great Britain and offers a world-wide compendium of various owls: multi-faceted, nocturnal birds of prey. Watercolors rendered in Pop-Art style and concise, lively prose highlight the individuality of 50 different species of owls that are indigenous to diverse regions of the world.

Sewell explores Woodland varieties like the Northern Saw-whet Owl--native to North America--which is "smaller-than-a-blackbird and fluffier-than-a-three-week-old Labrador" and has "pleading, puppy-dog eyes" etched with a permanent look of surprise. The Great Gray Owl, with a head like a "geodesic dome inhabited by a bunch of strung-out hippies," is considered a Wilderness variety that is a stealthy hunter built to survive in northern, glacial environments. The Elf Owl is one of the smallest that loves cacti and inhabits Wild West deserts of the USA and Mexico. While the Crested Owl is indigenous to tropical Central and South American climates and has eyebrows that appear like "incredible appendages" that serve to aid his camouflage efforts when pretending to be a branch.

This playful, well-conceived collection enhances--and also shatters--myths and folklores surrounding these "all-seeing, all-knowing" mysterious and imperious bird-hunters and proves fiercely entertaining and enriching in the process.

Note: This review is a reprint and is being posted (in a slightly different form) with the permission of Shelf Awareness. To read this review on Shelf Awareness: Reader's Edition (10/2/15), link HERE