How Georgia Became O'Keeffe: Lessons on the Art of Living 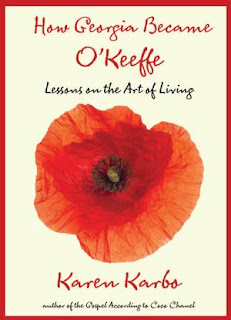 "She followed her own rules, and got away with it," author Karen Karbo states in How Georgia Became O'Keeffe, referring to the artist as "the poster child for doing exactly what you want, in the service of an abiding passion."

This innovative, inspirational biography seeks to understand the intersection of O'Keeffe's life and art. The narrative is filled with great wit and hilarity and delves beyond the facts of O'Keeffe's "art star" status in order to better understand her choices: why she lived and painted the way she did; endured a tumultuous, co-dependent artistic and romantic relationship with the father of modern photography, Alfred Stieglitz; and how she maintained her sense of self and authenticity throughout.

Karbo's personal admiration for this bold, fearless artist leaps off the page. A single verb introduces the theme of each chapter with the intent to compare the artist's challenges to those that plague creative women today. Karbo explores O'Keeffe's artistic influences while circling the idea that O'Keeffe came from a sensible, hardworking, middle-class family and yet, she continually took risks and defied expected traditions of womanhood in order to nurture and preserve her ideals of self-expression.

This is the latest installment in Karbo's "kick ass women" trilogy. The two other books examine the lives of Katharine Hepburn and Coco Chanel, also showing how strong, independent women forged their own paths by living true to themselves, despite being considered "unconventional."  While O'Keeffe continues to be revered as a personal icon to millions of women and aspiring artists everywhere, it is Karbo's original, wry analysis that is bound to enrich O'Keeffe's status even more.

Please note: This review is a reprint and is being posted (in a slightly different form) with the permission of Shelf Awareness. To read this review on Shelf Awareness: Reader's Edition (11/18/11), click HERE.
Posted by Kathleen Gerard at 9:00 AM

Valentine's Day... 24 hours dedicated to love, lovers and loving. For some, it's a joy. For others, a dread. They say the key to your true love's heart is through the stomach, so why not take to the kitchen and whip up something scrumptious for--or even with--your amore, surprising the object of your affection today and long after the designated day of romance?

Jacques Pepin can help. In Essential Pepin, he delivers more than 700 recipes, with something for every palate, including his signature roast duck a l'orange and crepes Suzette. Pepin blends the pragmatic with elegant sophistication. The "old chef," as he refers to himself, has come to the conclusion that even seasoned home cooks need the option of seeking some packaged shortcuts to help them prepare dishes from scratch.

And for dessert? Reach for Choclatique by high-octane chef and chocolatier Ed Engoron. This luscious cookbook is complete with useful tips and guides for whipping up decadent chocolate sweets for your sweetheart--even those with special dietary needs. There are 150 recipes for candies, cookies, fudge, soufflé, ganache, even cocktails. Watching your sugar or weight? Then simply cuddle up with the one you love and drool over the mouth-watering photographs of each delectable, chocolate-inspired creation.

But what if you don't cook or would rather not be trapped in your kitchen? You could always splurge and be wined and dined at your favorite upscale restaurant.

Service Included: Four-Star Secrets of an Eavesdropping Waiter by Phoebe Damrosch is part gritty exposé and part witty memoir, detailing the ascendant career of a restaurant captain at a high-end New York City eating establishment. The book is everything you've always wanted to know about the people who take and serve your order, including how a waiter navigates through elaborate menus and moves food from kitchen to table, as well as a waiter's interpretation of the dining foibles of notable clientele, critics and hand-holding couples.

Note: This article is a reprint and is being posted with the permission of Shelf Awareness. To read this piece as published on Shelf Awareness for Readers (2/14/12), link HERE
Posted by Kathleen Gerard at 11:32 AM

The House at Sea's End 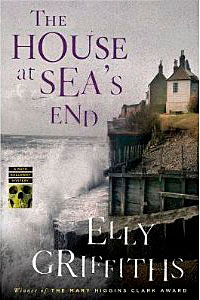 Forensic archeologist and college professor Ruth Galloway is having a hard time juggling the demands of her life, and things only get worse once this single mother returns to work after a maternity leave. When a team studying coastal erosion discovers skeletal remains buried under the cliffs near a historical home on Britain's Norfolk Beach, Galloway lends her expertise to the police and DCI (Detective Chief Inspector) Harry Nelson. Upon investigation, it appears six people might have been killed in one mass grave. Were the deaths accidental or the result of foul play? When the bones are determined to be roughly seventy years old, the investigation turns toward World War II, a time when the Norfolk coastline was patrolled by the Home Guard, a local group ready and prepared for German invasion. But when Nelson and Galloway and their counterparts begin questioning some of the now elderly old-time guards of Norfolk--and those who knew them during wartime--secrets are suddenly unearthed that may incur deadly consequences.

The House at Sea's End is an engaging, contemporary crime novel. This is the third book in the Ruth Galloway mystery series (The Crossing Places, The Janus Stone), and author Elly Griffiths continues to enrich the main forensic investigation with compelling characters embroiled in personal challenges. The reader learns that Ruth's newborn daughter was secretly fathered (in a previous installment) by DCI Harry Nelson, who is married and not intending to leave his wife. Therefore, the scenes involving Ruth, Nelson, the baby--and Nelson's wife--evoke as much suspense as the crime plot. Once again, Griffiths delivers a smart, well-balanced, atmospheric mystery.

Please note: This review is a reprint and is being posted with the permission of Shelf Awareness. To read this review on Shelf Awareness: Reader's Edition (1/17/12), click HERE.
Posted by Kathleen Gerard at 12:00 AM