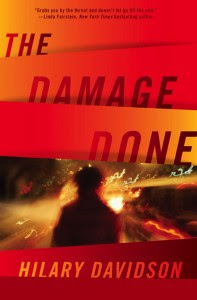 People, and why they do the things they do, are what draw me to a book and hold my interest. In Hilary Davidson's debut crime novel, THE DAMAGE DONE, she has written a provocative, extremely moving story that transcends the genre. For me, the appeal of this novel is the story about two very different sisters and the unshakeable allegiance they have to each other and the bonds of family - even amid a relationship that is frayed, flawed, and distant on so many levels.

How's this for a powerful opening paragraph?
It was the bright yellow tape that finally convinced me my sister was dead. When the police had called me, I’d cried for her, but afterward a slender thread of suspicion had snaked into my brain and coiled itself around my thoughts. Claudia was deceitful, like every junkie has to be, but she also had a temper and hated to be ignored. I’d kept my distance from her since September; maybe being the butt of the world’s worst practical joke was the price I would pay for four months of silence. That suspicion didn’t deter me from getting on the first flight I could out of Barcelona, but it kept my heart beating at a relatively steady pace until I’d arrived in New York. Part of me believed that I would come home and find my sister waiting for me with her dark eyes and twisted smile, pleased with herself for tricking me back into her orbit.

The twist is that Lily, the narrator of this well-rendered novel, learns that the body she has come home to identify is not the body of her sister, Claudia, at all. It seems as though somebody else has died in her apartment (an apartment she had sublet to her sister) and that somebody else had taken on her sister's identity. But where, then, is Claudia? The clues are many. Lily might've been estranged from her sister, but she knew Claudia's tastes always veered more toward Thomas Mann, Dostoyevsky and Poe rather than the Sex in the City DVD she finds left in the player in the apartment. Carefully revealed details like these and an intriguing cast of well-drawn characters make the reader question the motives of nearly everyone involved in this unraveling tale of psychological suspense.

Amid the plot points of the search, Claudia's absence turns into a presence that gradually becomes more and more palpable. Davidson peels back layers to reveal the psyches of these respective sisters, gradually exposing dark secrets spawned from shared traumas experienced in the girls' childhoods. Lily's determined plight to find her sister eventually forces her to confront her past until she ultimately discovers herself and comes to more fully appreciate the meaning of the verb to love. Along the way, Davidson keeps the reader guessing, turning pages to see what will happen next - and there are greats twists along the way.

The Secret Life of Emily Dickinson 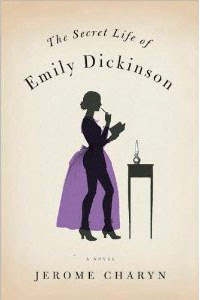 I thought I'd read all there was to know about Emily Dickinson. But upon reading Jerome Charyn's historical, largely biographical novel, THE SECRET LIFE OF EMILY DICKINSON, I considered her in a whole new light. Could the famous recluse of Amherst, an obsessively private woman, who secretly stashed 1700 poems that were discovered in a dresser drawer after her death, have had a passionate, wild side?

My view of Emily Dickinson has largely been one of a great poet whose work reflects a life spent railing against a God she could not understand, nor fully accept, and a religious faith that was imposed upon her. Charyn has whittled away that view and has instead emphasized a flesh and blood human being who shares more universal baseline dreams, obsessions and longings. Drawing characters from Emily Dickinson's real life (and interspersing some fictionalized characters), Charyn shatters the image of Emily Dickinson as a repressed, timid spinster and portrays her as a willful, rebellious woman with great desires and ultimately, great disappointments in love. At one point, she even wanders alone into a disreputable "rum resort" and boldly sits on the lap of a man who is void of all manners. Could this really be the same Emily Dickinson whom history has cast as a prim, passive-aggressive-type?

The plot evolves around the great loves in Emily's life - and this part of the story (the real and the imagined) is what entices the reader most. These loves include a host of male figures, including her father and even her beloved dog, Carlo. Her brother, sister, sister-in-law and even a fictionalized best girlfriend from school, Zilpah - who becomes Emily's nemesis - also figure prominently. Charyn has a full grasp on the artistic temperament of his protagonist, a woman who displays dramatic fervor and intense devotion to the people and aims of her life. However, the author leaves admirers of Dickinson's work to speculate how these great loves might have influenced her poetry.

The book is told in the first-person point-of-view of Emily, whose voice is forthright and, at times, wickedly insightful. Charyn intersperses italicized, omniscient narrative chapters to segue scenes and offer back story. The novel opens at the Mount Holyoke Female Seminary. Emily, a reluctant 17 year-old student, is enthralled by Tom, the campus handyman (an illiterate pick-pocket), complete with a racy tattoo on his arm. When Tom becomes ill, Emily secretly goes to help him and their attraction solidifies. When the headmistress gets wind of this, she expels Emily, and Emily is forced to return home. By then, Emily is completely smitten with Tom, who continues to make cameos over the course of Emily's life and the trajectory of the story.

Once Emily returns to "The Homestead," her story becomes rather episodic, entrenched in the relationships Emily has with her controlling father, the rest of her family, and Zilpah, who comes to work as a housekeeper for the Dickinsons and wins the favor of Emily's father (in addition to Emily's resentment). Zilpah and her connection to Tom serve to keep continuity to the plot as a host of men (potential suitors) cross Emily's path - each with his own unique connection to Emily, and vice-versa.

THE SECRET LIFE OF EMILY DICKINSON is a well-told tale as a novel unto itself.  It seems as though the author, in writing such a provocative story, has tried to imagine possible reasons why America's most alluring poetess lived such a mysterious, obscured life.

NOTE: This book was reviewed via an electronic ARC (Advanced Reader Copy) of the novel as provided by Tribute Books.