The Writer's Life
Paula Hawkins is best known for The Girl on the Train, her psychological thriller (turned major motion picture) about a despondent, down on her luck, voyeuristic commuter who gets swept up in a murder investigation. Hawkins's sophomore psychological suspense novel, Into the Water (just published by Riverhead; click HERE to read my review below), delivers another dark, spellbinding story that explores the overt and subtle ways trauma, grief and long-buried secrets can affect minds, hearts and motivations.

Why do you think The Girl on the Train resonated so deeply with readers?

I think there are two main points of resonance: the voyeuristic impulse, which I believe is universal, and the character of Rachel (the main protagonist). Rachel is liked and loathed, but she rarely bores.

Has success altered how you write?

Success is both reassuring (people liked the book, so I must have done something right) and unnerving (I now have a huge readership with sky-high expectations). When I was writing Into the Water, I just had to shut out the noise, concentrate on the task at hand and write the best book that I could. That is how I approach every book: I want to improve, to stretch myself.

Is the town of Beckford, the setting of Into the Water, based on an actual place?

Beckford is entirely fictional, although the part of the world in which I have placed it--Northumberland, in the northeast of England--is real.

Why did you choose to structure the book via varying points of view, weaving in a complex and historical backstory and even including fictional book passages?

I had to devise all sorts of strategies in order to tell this twisted tale. There are many mysteries in the book, both current and historic--and the challenge was to allow the characters' secrets to reveal themselves at the right pace and in an interesting way. So I chose to tell my story from many different viewpoints, some first person and some third person; I chose to include flashbacks and a book-within-a-book.... I even chose to leave one or two mysteries unsolved.

A large cast of characters populates Into the Water and those characters are quite diverse in terms of age, life experience, status and background.

The characters developed slowly, over time, the way my characters always do. I have to live with them for a while, to get into their heads and under their skin. That was quite a task for this book, because it has a much wider cast of characters than The Girl on the Train did.

Any favorite characters--who and why?

I love Nickie Sage. Nickie claims to be a psychic--she says she's descended from witches and that she can talk to the dead. Everyone in the village thinks she's a nutter, or a fraud, so they ignore her. But--whether you believe her outlandish claims or not--the fact is, she's an observer. She's canny and astute, and she knows everybody's business.

When you sit down to write a new novel, do you conceptualize the book from start to finish, or does the story arise organically?

I usually know the bones of the story, its basic architecture. But the detail evolves during the writing. I think that many of my better ideas and more ingenious twists have come to me while I was immersed in the writing process.

Do you ever get blocked or stalled in your writing? If so, what do you do?

I don't tend to get blocked, but I do sometimes write myself into a corner from which I find it difficult to escape. When that happens, I usually go for a walk, take a long hot bath or, if neither of those things help, I turn to my agent, my plotting co-conspirator.

You were a journalist before writing novels. What was the impetus for you to branch out?

I was on staff at the Times for several years, but I also freelanced, working for a number of publications. I covered finance and property (real estate), which I really enjoyed, but I was never a great journalist. I'm much better at making up stories than I am at getting the truth out of a reluctant subject.

Using the pseudonym Amy Silver, you wrote "chick lit" novels. Did those influence the writing you're doing today?

Writing those books was wonderful training: I learned a great deal about developing character and about how to pace a novel in order to draw the reader into the story.

Would you ever return to writing romantic comedies?

No. I wouldn't--it really wasn't my forte (I'm not romantic, or particularly funny for that matter...).

How and why did you switch to writing such dark, psychological suspense?

Psychological suspense is much more my cup of tea--I'm drawn to dark subject matter. I'm fascinated by the behavior of people who are frightened, or grieving, or lonely, or damaged in some other way.

Who are your favorite authors?

Any plans for Into the Water to hit the big screen? And who do you think should play the key characters?

Dreamworks has optioned it, so hopefully we'll see it up on the big screen before too long. I'm not fantasy-casting just yet. Don't want to jinx anything....
NOTE: This interview is a reprint and is being published with the permission of Shelf Awareness. To read this Q&A as originally published on Shelf Awareness for Readers (5/26/17), link HERE

Posted by Kathleen Gerard at 1:08 PM

A close-knit British community grapples with mysterious deaths--past and present--that occurred at a notorious local riverbank. 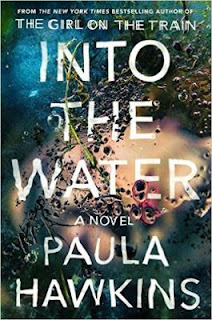 Paula Hawkins (The Girl on the Train) delivers another dark, spellbinding suspense novel with Into the Water. This time, the search to unravel a mysterious death focuses on the river that cuts through Beckford, a small, northern British town. Nicknamed the "Drowning Pool," the river is where, over the centuries, local women--outsiders as well as misfits from within the community--have died under tragic, often suspicious, circumstances.

Danielle "Nel" Abbott--a single mother, successful photographer and lifetime Beckford resident who had been writing a book about the Drowning Pool, its history and its secrets--has become a suicide casualty at the very place of horror she had been researching. Her younger sister, Jules Abbott, gladly fled Beckford years before. An unmarried social worker in London whose bitterness and resentment kept her estranged from Nel for years, Jules returns to Beckford to sort out the "bloody mess" and care for Nel's outspoken and rebellious 15-year-old daughter, Lena. Neither believes that Nel killed herself, and Lena also has doubts about the suicide of her best friend, Katie Whittaker, at the Drowning Pool six months earlier. Katie's inconsolable parents are wracked with guilt. Were they so focused on their anxious, sensitive son that they didn't give proper attention to their confident, over-achieving--yet obviously vulnerable--daughter?

Hawkins keeps readers guessing while exploring the overt and subtle ways trauma, grief and long-buried secrets can affect minds, hearts and motivations. A growing undertow of suspense builds as some characters, consciously and subconsciously, cannot face who they are, so they reinvent themselves and their memories. This intricate story is filled with red herrings and surprising reversals that probe the tangled depths of family loyalty.

Posted by Kathleen Gerard at 1:04 PM

Two Brits keep missing each other--and their chance for true and lasting love--over the course of 16 years.
Two young Brits repeatedly meet by chance but chronically fail to connect in Kate Eberlen's captivating first novel, Miss You. Their circuitous journey starts in summer 1997, when Tess and her best friend are traveling after high school graduation. In Florence, they cross paths with Gus, also a recent high school grad, who is traveling with his parents after the tragic death of his brother, the favorite son. A simple search for gelato first brings Tess and Gus together, but their encounter is fleeting because he feels inhibited in the presence of his parents. They return separately to London, and Gus heads to university to study medicine. Meanwhile, Tess defers academia because her mother dies after a battle with cancer; Tess must assume the care of her five-year-old sister, Hope, who has Asperger syndrome.
What ensues is a compelling story--told in alternating points-of-view--about the sense of responsibility and guilt inflicted upon both. Miss You maps Gus and Tess's crisscrossing journeys over 16 years. They briefly meet again at London coffee shops, a Rolling Stones concert in Glastonbury and when Gus's children get temporary tattoos at the salon Tess manages. Detours, distractions, sacrifices and bad choices lead to life-changing betrayals by friends and lovers. This episodic, detail-rich narrative breeds suspense as readers grow eager to learn if fate will ever allow these two lost souls--who often feel trapped by the elusive nature of love and happiness--finally to find each other.
Miss You: A Novel by Kate Eberlen
Harper, $25.99 Hardcover, 9780062460226, 448 pages
Publication Date: April 4, 2017
To order this book on INDIEBOUND, link HERE

Posted by Kathleen Gerard at 2:33 PM 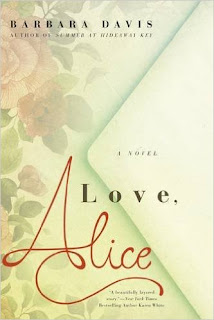 Two grief-stricken women cross paths and help each other come to grips with the mysteries of their respective lives.

Societal stigmas and taboos reside at the heart of Love, Alice by Barbara Davis (Summer at Hideaway Key). Set in Charleston, S.C., the novel focuses on 36-year-old Dovie Larkin, whose fiancé committed suicide two weeks before their wedding. A year later, Dovie spends her lunch hours sitting graveside at the cemetery, still grappling with what happened and why, unable to pick up the pieces of her life.

One day, Dovie spots an elderly woman leaving a note at the striking angel grave marker of Alice Tandy, a young maid who died 32 years earlier and, to the bewilderment of locals, had been buried in a plot belonging to one of the richest families in town. After the woman leaves, Dovie reads the note: a mother's impassioned regret for having sent her young daughter to an asylum for unwed mothers in Cornwall, England, in the 1960s. Dovie, identifying with the unresolved grief expressed, soon discovers a trove of related letters in the cemetery's lost and found, and sets off in search of the writer, Dora Tandy, who has come to Charleston to learn more about the life--and death--of her long-lost daughter, Alice.

Hope, love and forgiveness permeate this beautifully rendered novel where both Dovie and Dora unearth answers to mysteries and reveal secrets that will come to define their respective lives and quests for peace.

NOTE: This review is a reprint and is being posted with the permission of Shelf Awareness. To read this review on Shelf Awareness: Reader's Edition (January 3, 2017), link HERE
Posted by Kathleen Gerard at 12:00 AM