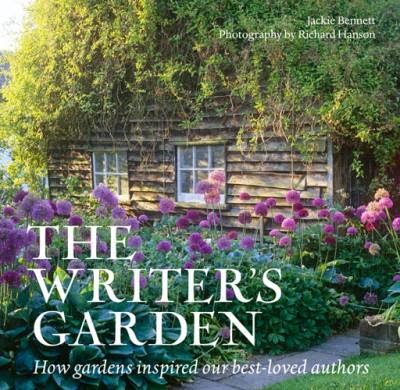 Jackie Bennett (former editor of The Garden Design Journal) offers an intimate glimpse into the country homes and gardens of notable, accomplished British poets, essayists and novelists in The Writer's Garden: How gardens inspired our best-loved authors. This coffee table book examines the lives of nineteen, diversely accomplished British writers and how their  private residences facilitated their work: Virginia Woolf wandered the room-like gardens at Monk's House while she labored over Mrs. Dalloway. Charles Dickens tended daily to the gardens at Gad's Hill Place before tackling masterpieces like Great Expectations. The woodland paths and boathouse at Greenway inspired Agatha Christie's Dead Man's Folly. And would there have ever been a James and the Giant Peach had Roald Dahl not studied his own fruit orchard and crawly creatures in the gardens at Gipsy House?

Archival images and vivid landscape photographs by Richard Hanson accompany the profiles and enhance each intimate glimpse into the countryside sanctuaries that fed the imaginations of great writers. "Written in Residence" sidebars offer lists of works created at each locale, and epilogues explain what became of the homes and gardens after the death of each revered wordsmith.

Note: This review is a reprint and is being posted (in a slightly different form) with the permission of Shelf Awareness. To read this review on Shelf Awareness: Reader's Edition (11/29/14), click HERE

Posted by Kathleen Gerard at 10:48 AM

Opinion:
Who says you can't serve meatballs for Thanksgiving?

Thursday, November 27, 2014
Opinion/Editorial: "Other Views" (Section A-23)
BY KATHLEEN GERARD

To read the article in its entirety, click on the highlighted title above
Posted by Kathleen Gerard at 10:38 AM

Sonya Cobb: The Value of Craftsmanship and Art 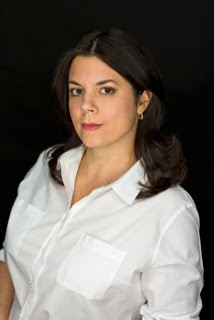 Note: This interview is a reprint and is being posted with the permission of Shelf Awareness. To read this
Q&A as originally published on Shelf Awareness  (8/29/14), click HERE

The Objects of Her Affection

An ordinary woman becomes a thief of Renaissance art in order to pay the bills in The Objects of Her Affection, an engrossing novel by Sonya Cobb that focuses on themes of want and need. 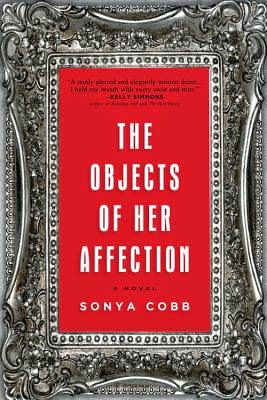 The Porters are a young, seemingly idyllic Philadelphia family. Beneath the surface, however, Sophie Porter and her husband Brian want different things. Brian, a workaholic curator at the Philadelphia Museum of Art, is focused mainly on his career, constantly traveling. Sophie, feeling neglected and at a professional standstill as a web developer, thinks being approved for a hefty mortgage on a 150-year-old fixer-upper house will empower her life and give the couple's two children the childhood she herself never had.

Brian sees all the problems with the house, while Sophie sees a perfect future. When their approved adjustable-rate mortgage suddenly skyrockets and the Porters can't pay the bills, Sophie panics, yet she keeps the financial anxieties a secret. While visiting Brian at the museum one day, she discovers a trove of small, poorly stored, valuable works of art. Sophie 'accidentally' makes off with a Renaissance decorative mirror. Fearful of having to return it and thinking it might pay off some debt, she sells it to an art dealer who befriends Sophie while pulling her into a life of crime.

"She only wanted what was best for her family," Cobb writes about her deeply flawed, risk-taking protagonist with whom some readers will empathize. The thought-provoking, suspenseful plot will also hold crossover appeal for fans of thrillers as well as those intrigued by the lives of ordinary people misguided by their decisions and desires.

Note: This review is a reprint and is being posted (in a slightly different form) with the permission of Shelf Awareness. To read this review on Shelf Awareness: Reader's Edition (8/1/14), click HERE

In my novella Cold Comfort, a workaholic photojournalist returns to an Italian-American enclave in Rhode Island to spend Thanksgiving with her only remaining relative, a hip 96-year-old aunt who texts and blogs. Challenged by a blizzard and a blackout, the aunt is intent on serving the family's traditionally Italian, seven-course Thanksgiving feast when a character off-handedly remarks, "Maybe your aunt thinks the pilgrims were Italian?"
With Italians, it's always about the food. But Italian-American culture has brought more to the American table than just culinary prowess. Their immigrant influence has distinctly touched all the arts--especially the literary landscape heralded by Gay Talese, Francine Prose, Mario Puzo and Adriana Trigiani.
Joseph Luzzi launches My Two Italies, his deeply personal Italian-American memoir, with a story about how, as a boy, a beloved aunt arrived at his house one morning and gave him a pet rabbit that, hours later, wound up served on the family dinner table. This is just the beginning of Luzzi's historical examination of the contradictions imbued in Italian culture both in the U.S. and abroad.
In All This Talk of Love, novelist Christopher Castellani lovingly explores the hopes, wishes and dreams of the Grasso family, Italian-American immigrants and their offspring, who, in this last book in a sweeping trilogy, must cope with their roots, the price of sacrifice and loss, myths and memories. Italian-American writer Ann Hood chronicles a strongly feminine point-of-view in her novel An Italian Wife, a multi-generational saga centered on Josephine Rimaldi, a young woman who journeys from Italy for an arranged marriage and how the trajectory of her life is sensuously infused by family, faith and love.
Maybe after you whip up some Turkey Tetrazzini and Pumpkin Pie Gelato from your Thanksgiving leftovers, you'll be inspired to crack the cover on a book penned by a "pilgrim" of Italian-American descent.

Note: This article is a reprint and is being posted with the permission of Shelf Awareness. To read this piece as published on Shelf Awareness for Readers (11/18/14), link HERE
Posted by Kathleen Gerard at 10:56 AM 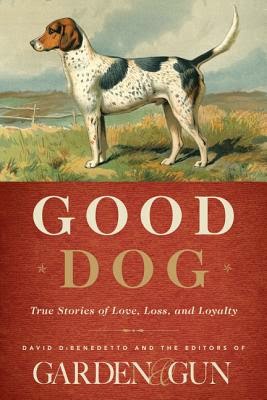 Garden & Gun is a magazine devoted to the best of Southern food, music, arts, literature and sports. The "Good Dog" column, which highlights personal stories about purebreds and mutts--good or bad, living or dead--has become a reader favorite. In Good Dog: True Stories of Love, Loss, and Loyalty, David DiBenedetto and the editors of Garden & Gun offer a diverse compilation of the most memorable essays (and some new additions) about dogs and why we love them—no matter what!

The 51 stories in the anthology are by notable writers--novelists, journalists and humorists--most of whom have a connection to the South and whose lives have been affected, for better or worse, by dogs. The anthology is broken down into five sections: The Troublemakers, Afield, Man's Best Friend, Family Ties and Life Lessons.

Some essays are profound; Mary Lou Bendrick's "Last Rites" details the experience of her dog's grand exit from the world. Straddling the line between pathos and humor are essays such as "Licked to Death by a Pit Bull," in which Bronwen Dickey fights the prejudice against a notorious "bully breed." Comic relief infuses others; in "My Mother, My Dog," Donna Levine believes her cockapoo is her mother reincarnated, noting their relationship "has never been better."

Regardless of whether the pets have been adopted from an animal rescue or purchased from a breeder, acquired to offer companionship or protection, each story conveys the endearing sense of love, loyalty and resilience that comes from sharing a life with dogs.

Note: This review is a reprint and is being posted (in a slightly different form) with the permission of Shelf Awareness. To read this review on Shelf Awareness: Reader's Edition (10/31/14), click HERE

This review was also featured (in a much longer form) on Shelf Awareness: Book Trade (10/10/14). To read the longer review click HERE
Posted by Kathleen Gerard at 12:00 AM


From My Shelf: Happy Halloween!

A house is normally considered a safe place. In fiction, however, when a house has creaky stairs, rattling shutters, dark attics and basements and trapped secrets that embody the shadowy essence of unnerving spirits, scary becomes even scarier--especially on Halloween.

Shirley Jackson paved the way with her terrifying 1959 novel, The Haunting of Hill House, where four people investigate an 80-year-old house filled with spirits and other unexplained events. Richard Matheson expanded that premise in Hell House (1971), where a physicist and two mediums examine a spooky shuttered house in Maine presumably haunted after serving as a domicile for decadence, drugs and alcohol.
The unifying elements of haunted house novels--past and present--seem to be long-buried secrets, demons from the past that need to be confronted and escalating suspense. 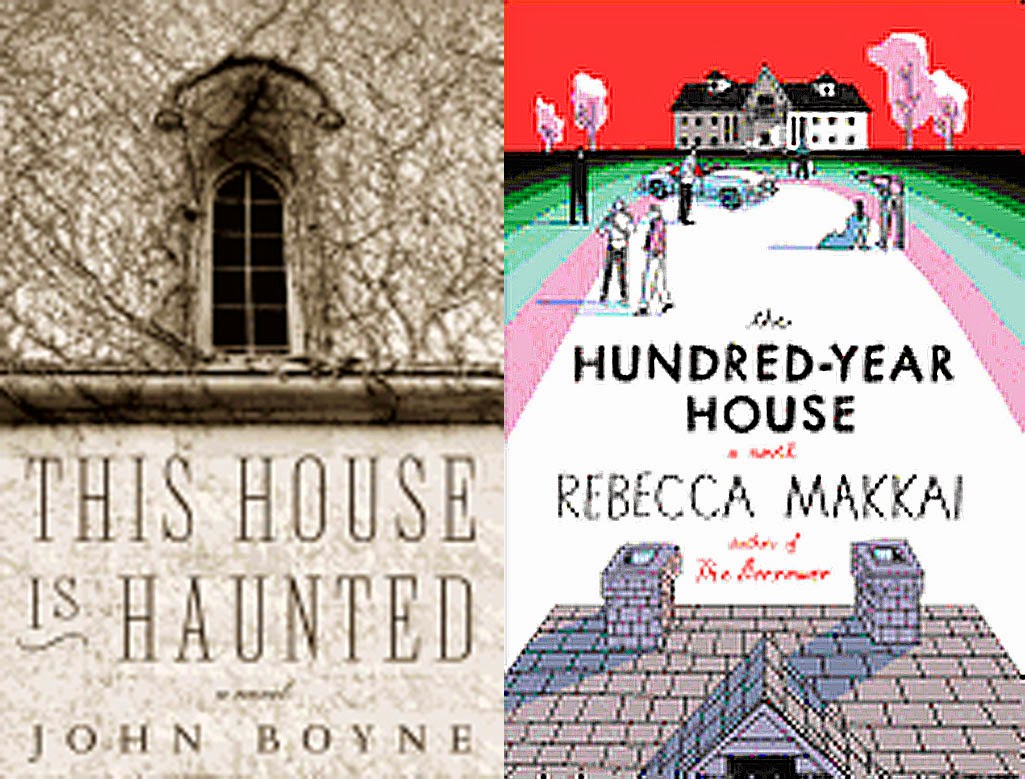 This House Is Haunted by John Boyne is set in a country estate in 1860s Norfolk. This Dickens-inspired story centers on a governess who cares for two seemingly parentless children and a malign, supernatural presence that taunts them.
An old carriage house on a sprawling estate invigorates Rebecca Makkai's The Hundred-Year House, where a young couple faces unexpected rumors of buried bodies, family mysteries and the presence of a ghost immortalized in a prominently displayed portrait.

Long-dead, lingering spirits--former residents of an old country house--jostle with an estranged, contemporary family, heirs who have come to sort through the detritus of their departed patriarch in Rooms, an imaginative, explosive story by Lauren Oliver.
In A Sudden Light, Garth Stein has crafted an atmospheric ghost story set in a rambling Pacific Northwest ancestral estate. This epic tale is part family saga and part mystery, infused with secrets, curses, dark familial legacies and a tragic love affair.

While jack-o'-lanterns, bats and witches are all symbols of Halloween, it's the haunted house, where ghosts and a fear of the unknown collide, that keeps readers bound captive to the page!

Note: This article is a reprint and is being posted (in a slightly different form) with the permission of Shelf Awareness. To read this piece as published on Shelf Awareness for Readers (10/31/14), link HERE
Posted by Kathleen Gerard at 1:08 PM