In this adventurous, poignant novel, a feisty 88-year-old comes to the rescue of his roommate's troubled granddaughter.
Brooke Fossey's cleverly conceived, charming first novel, The Big Finish, centers on gruff and feisty 88-year-old Duffy Sinclair--a never-married Vietnam vet and recovering alcoholic. He believes his days are numbered while in residence at Centennial, an assisted living community in Everton, Tex. Duffy is fun and spirited. He jokes with the nurses, complains to the dining hall cook, riles the facility manager and flirts endlessly with an attractive female resident. Duffy and his staid best friend and roommate, Carl Upton, are still able-bodied and intellectually sound. But Duffy worries, if he doesn't toe the line or if he loses mobility, he'll be moved to Simmons, a dreadful nursing home for the aged, to live out his last days. Duffy's fears soon fall by the wayside, however, replaced by bigger ones, when Carl's granddaughter, Josie--a reckless 20-something whom Duffy never knew existed--breaks into their room through a window, seeking refuge. Her mother, the daughter of Carl's former mistress, has died, and Josie, in trouble, has fled an abusive boyfriend.
What ensues is an often madcap yet deeply poignant story. Josie's predicament and presence (Duffy and Carl secretly harbor her at the assisted living community) rallies Duffy's empathy and affections, forcing him to re-examine his life and take stock of--and perhaps even alter--his destiny.
Fossey delivers a funny, adventurous novel about second chances, redemption and how, just when it might seem as though life is winding down, it's actually just getting started.


The Big Finish: A Novel by Brooke Fossey


NOTE: This review is a reprint and is being posted with the permission of Shelf Awareness. To read this review on Shelf Awareness: Reader's Edition (May 15, 2020), link HERE
Posted by Kathleen Gerard at 3:00 AM 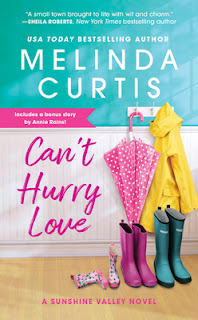 
A charming, cheerful romance about a young widow who discovers secrets about her late husband as she carves out a new life.


Prolific romance writer Melinda Curtis (the Mountain Monroes and the Kissing Test series) begins a lively rom-com series filled with a large cast of eccentric characters, zany humor and a slew of clever plot twists.
In Can't Hurry Love, Lola Williams is a 29-year-old who gave up a career in New York City doing hair and make-up for high-powered Broadway celebrities in order to marry Randy and relocate to his small hometown of Sunshine, Colo. After only a year of marriage, Randy is killed in a car accident. Lola struggles as a young widow in a town where everyone knows everyone else's business--except for Lola, who, when she goes through her husband's belongings, discovers Randy was keeping secrets. Was he cheating on her?
Upset and angered by a string of unsettling revelations, she sets some of Randy's things aflame in a bonfire that draws the Sunshine Valley Widows Club and also Sheriff Drew Taylor, a divorcé and devoted father who's sworn off women. Sheriff Taylor and the group of local widows come to the emotionally wounded Lola's rescue: women of all ages, personalities and quirks; do-good fundraisers, gossips and self-professed matchmakers with tales to tell. Lola then becomes determined to solve the mystery of Randy. While on her quest, she starts to build a new life, suddenly finding herself enmeshed in the fabric of busybody small-town living, while also opening her heart again to love, however reluctantly.
Curtis weaves laugh-out-loud comic scenes with heartfelt emotions, delivering an endearing, wholesome romance.

Posted by Kathleen Gerard at 1:00 AM