I've heard it said that there is often one person in a family whose choices have the ability to turn the tide and change the tenor of the entire group. Such is the case with the Warringtons. When Bill Warrington, a 79 year-old, widowed patriarch--an ex-marine and veteran of the Korean War and a domineering father--is diagnosed with an unnamed brain disorder (likely dementia), he tries to reunite his three, estranged grown children. When he learns that they don't share even a shred of his enthusiasm, Bill impulsively kidnaps his 15 year-old, granddaughter April (she goes with her granddad rather willing) and sets out on a summer road trip from the Midwest to California that he hopes will force the troops to finally have that reunion before it's too late. 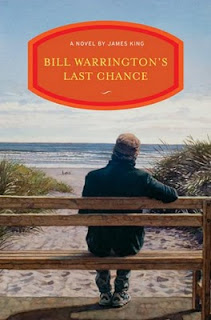 This is a story about the journeys we make in life within our families - and often without them. Each of the characters at the beginning of Bill Warrington's Last Chance, the outstanding debut novel (winner of the 2009 Amazon Breakthrough Novel Award) by James King, seems stalled in their lives. Many years prior to the action of the narrative, Bill's wife and the mother of their children, died. Her passing has left lasting, far-reaching scars. But it is Bill's actions over the course of the story that provide a necessary jolt for each of these characters to reconnect with themselves and each other. There is Mike, the eldest son, who is in a troubled marriage and has distanced himself from his father. He believes Bill gave his mother an overdose of pain pills and ultimately caused her death. Nick, the middle child and a widower for three years, is struggling to get on with his life. And then, there is Marcy, a bitter, opinionated, take-charge divorcee challenged in her efforts to raise her rebellious, precocious daughter, April.

James King does a fine job of painting a very realistic (often bittersweet) portrait of modern-day family dynamics. He propels the story forward at a brisk pace by writing tight scenes that blend humor and pathos, pitch-perfect multi-generational dialogue, and dropping in carefully chosen details of back-story that account for many of the behaviors of these well-rendered characters in the present. King does all of this by fleshing out the novel through five, very effective, points of view.

The texture of the story is further enriched by the juxtaposition of April, an often snide young woman with her life ahead of her, against her curmudgeon grandfather, who is entering the final chapters of his life. The scenes between the two of them were most resonant - often harrowing and extremely moving. This is especially evident as Bill's thought processes begin to fail, and April must take over the driving and decision-making during the road trip. This debut novel successfully blends hot button topics with themes of reconciliation and redemption that make it appealing for a wide, crossover audience. 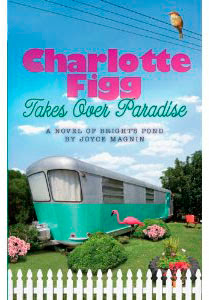 Liberation. That's the theme of CHARLOTTE FIGG TAKES OVER PARADISE, an uplifting, lively new novel by Joyce Magnin. When Charlotte Figg's oppressive, tyrannical husband of twenty years dies, the widow searches the internet and discovers a quaint, double-wide trailer in a place called "Paradise."  In an effort to escape her past and start anew, she purchases the place sight unseen, packs up with her dog and hits the road with high hopes. However, when Charlotte gets to Paradise, she finds her new digs anything but.

Strapped with a trailer that is in complete disrepair, Charlotte, in search of a catharsis to ease her angst, takes to the kitchen and bakes her delectable fruit pies for her neighbors. It is in sharing each of these sweet treats that Charlotte slowly becomes acquainted with a cast of quirky characters as misfit as Charlotte, many of whom also feel trapped in dead-end marriages and stalled lives. There is a woman covered with tattoos, a dwarf, a woman who breast feeds a much too old child, a set of twins and a one-armed man. Charlotte remains undaunted by each challenge and person keeping her from the "paradise" she had envisioned for her future. She is determined to find meaning and purpose for her life, and in doing so, she becomes a catalyst that stirs things up in the community. As a means to reconnect with the joys of her youth and find herself again, Charlotte rallies the women of Paradise to join her in establishing a softball team. Think A League of Their Own meets The Bad News Bears. It is amid Charlotte's quest that the women of Paradise emerge to share a common bond, their individual secrets and tales of woe, and ultimately forge friendships. Domestic abuse is a thread running through this coming-of-middle-age, feel-good novel of faith and friendship.

NOTE: This book was reviewed via an ARC (Advanced Reader Copy) of the novel as provided by NetGalley.