Beth Harbison has been writing a novel a year (sometimes two) since 1997, when, under the name Elizabeth Harbison, she began writing and publishing series and stand-alone category romances with Silhouette Books. Along the way, she's also published four cookbooks, most notably on bread machine baking.
Harbison admits that series romance proved limiting. "The focus," she said, "has to be on the romance and romance alone. My thoughts eventually expanded beyond that... though the elemental 'love saves her' idea never fully leaves my consciousness."
Shoe Addicts Anonymous, published in 2008, launched the next phase of her career: she's written seven lively and engaging novels about contemporary women facing romantic challenges. Harbison's novels often explore difficult life situations, but each story is woven with humor and a sense of the absurd. Her latest, Chose the Wrong Guy, Gave Him the Wrong Finger (published by St. Martin's; see review below) is a bittersweet novel that centers on two very different brothers, and how they affect a woman's life and her ability to love.
The titles to your books are very clever--When in Doubt, Add Butter and Hope in a Jar, among others. How do your titles come about, and is there a story behind the title of your latest novel?
Usually my editor, Jen Enderlin, and I brainstorm what's next. We have total mind-meld, in general, so these 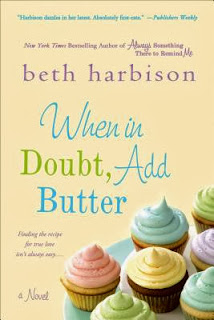 conversations are always fun and productive. As we talk, she'll often snap her fingers and say, "That's IT!" I remember we were eating at Tom Colicchio's Craft Restaurant in New York when she said, "What do all women want? To be thinner, richer, and prettier." And there it was, fully formed. Thin, Rich, Pretty--the title for my novel.
The title for Chose the Wrong Guy, Gave Him the Wrong Finger is to Jen's credit, as well. She'd read an article while on the train some years back about a woman who had called off her wedding and sent out a similarly snappish response.
You've been remarkably prolific in your career. Describe your process and inspiration.
I have a lot of emotions and thoughts, and if I don't write them down they rattle around inside my head and actually start to hurt. Too much still ends up in e-mails to my friends and family, but writing books is a great way to get it all out.
You've written in many genres, from romance to cookbooks to women's fiction. What are your feelings for each genre, and why does each appeal to you? Are there any more cookbooks in your future?
I'd love to do more cookbooks, but with Food Network and the like making celebrity chefs into major media stars, there's no room for an ordinary cook to do a cookbook, no matter how good. As for what appeals and why, it's always a mood thing, isn't it? Romance appealed at a time when my life was simpler.... My children got older, my life got complicated, and more issues came up--from health worries to divorce to death--and romantic fantasy alone no longer felt honest to me. I wish it did, though. I miss those days.
Your books are about women finding love and romance, and your stories' themes are fate, second chances and happy endings. What are your feelings about happy endings--in life and in literature?
I didn't think most of my women's fiction books were about finding love, but I guess you're right. More recently, they've certainly become more encompassing of the idea. At the risk of becoming too morose, I guess the answer is that I have always been a melancholy person. My first writing venture was re-writing the end of Black Beauty in the fourth grade and bringing all the horses back to life because I hated the sadness of having "watched"--through the story--the happy early days for them deteriorate into sad endings. Unfortunately, that seems to happen too much in life. When I was 17, I came home and found my father had passed away on the couch--my mother was out of town and my sisters were grown, so it was only he and I at home at the time--and that was an early indication of how hard and unfair life could be. This came directly after a very emotional breakup that I loosely chronicled in my novel Always Something There to Remind Me. I started thinking very seriously around that time about how easy it would be to dissolve into the negativity of life, but I couldn't afford to live like that, because eventually there's no more "up." I had to decide to believe in happy endings--chances of being happy are much greater if you expect happiness. The person who expects to be miserable is seldom disappointed.
What inspired you to write Chose the Wrong Guy, Gave Him the Wrong Finger?
This novel is set in Virginia, which is a landscape I know and love. I love horses. I love farms, but I pretty much 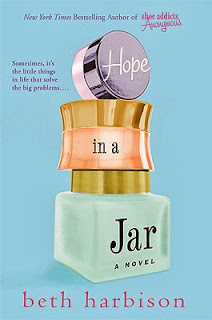 made up the rest of the story. Writing romantic tension is just plain fun, yet not a thing in the book actually happened to me.
In each of your novels, you write big scenes that are often peppered with small details and first-person point-of-view asides that intensify the overall charm of each story. Do these details emerge in early drafts or do you add them later during rewrite?
Ha! Details are usually all I have. I am a detail queen! Not in terms of handling the details of my life, alas, but that is my writing style. I can write a scene of stirring cream into your coffee that will make you feel like you're hyped up on caffeine. Unfortunately, that's not enough to write a book, so I always have to go back in and beef up those "slices of life" up with plot.
What's next?
Recently, my ex-husband passed away very suddenly after 25 years in my life, so everything turned upside down for the kids and me. There will definitely be a next novel, but the idea isn't solid yet. That said, I can't wait to come up with a meaty plot to dive into so I can get out of my own head and into a pretend world instead!

Note: This interview is a reprint and is being posted with the permission of Shelf Awareness. To read this Q&A on Shelf Awareness: Reader's Edition (7/9/13), click HERE

Posted by Kathleen Gerard at 3:24 PM 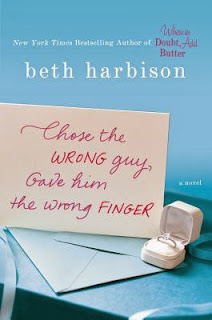 Love and its many contemporary complications have become the hallmarks of Beth Harbison's cleverly titled novels. In Chose the Wrong Guy, Gave Him the Wrong Finger, a single woman is forced to come to terms with two brothers who broke her heart ten years before. Harbison sets up a love triangle that's sure to please fans of entertaining, light-hearted women's fiction.

In this story, small town girl Quinn Barton had every intention of marrying her high school sweetheart, Burke Morrison. Moments before she is to walk down the aisle, however, her brother-in-law Frank pulls the twenty-one year-old bride aside and announces that Burke, his brother, has been cheating on her. Quinn, appalled, calls off the wedding and has a short-lived rebound relationship with Frank that ultimately fizzles. For the next ten years, with the boys having departed their Middleburg, Virginia hometown, Quinn stays behind, married to her job running a local bridal shop.

When Burke and Frank's eccentric, 82 year-old grandmother decides to marry again, she hires Quinn to make her wedding gown. Might this be a scheme to lure the boys back to town? When they arrive for the ceremony, and to tie up loose ends on the family farm, Quinn realizes the story of the Morrison brothers and the depth of her feelings for them, are not really over - and vice-versa.

Harbison (When in Doubt, Add Butter) has once again created an endearing, humorous story with laugh out loud twist and turns. The interior intimacy of her witty, first person point of view protagonist leads readers on a well-balanced, romantic journey from true love to heartbreak - and back again.

Note: This review is a reprint and is being posted (in a slightly different form) with the permission of Shelf Awareness. To read this review on Shelf Awareness: Reader's Edition (7/9/13), click HERE

Posted by Kathleen Gerard at 3:07 PM 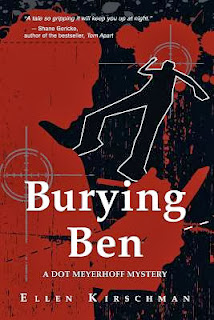 Burying Ben opens with the suicide of Ben Gomez, a sensitive young rookie cop who had a serious personality clash with his Field Training Officer (FTO), jaded Eddie Rimbauer, who chronically needled Ben, referring to him as "Mr. Safeway," as in the food store. "He used to work produce. Knows how to handle a cantaloupe, but he's over his head as a cop," Rimbauer once told Dot when she counseled Ben, working hard to earn the rookie's trust while gauging his ability to perform amid the pressures of law enforcement.

After Ben kills himself, his emailed suicide note blames Dot for his tragic fate. He believed Dot breached their patient-therapist confidentiality and made matters worse for him with his bullying, demeaning FTO.  As a result of the therapy sessions and Dot's advice, Ben even believed his marriage began to suffer.

Ben's accusations about Dot, a divorcee still hung up on her ex, shatters her self-worth and confidence. Is she truly responsible for this young man's death?

When charges are later brought against Dot by Ben's widow and Dot is put on administrative leave without pay, investigated by the California Board of Psychology, she becomes determined to learn more about Ben and other factors that could've led to his death.

Everyone on the police force comes into question, in particular FTO Rimbauer and the police chief, as well as Ben's family, friends and peers. Even Dot's ex, a psychologist who steps in for Dot at the police department, becomes suspect.

As Dot slowly puts the pieces of Ben's life together, danger abounds as it becomes clear that Ben lived with many secrets and faced a slew of life complications including a dysfunctional family, a baby on the way and a shotgun wedding to a sociopath wife with displeased parents, most especially her high-powered, District Attorney father.

Author Ellen Kirschman, an award-winning public safety psychologist in real life, conveys an authoritative grasp on cops—their language, mentalities and lifestyles. The dramatic, suspenseful narrative of Burying Ben is authentic and compelling, as are the chilling realities of life for a smart, middle-aged, career-driven protagonist forced to reinvent her life amid a string of unfortunate events.