The Book of Tomorrow 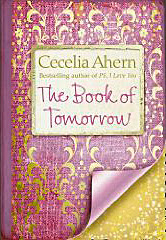 My name is Tamara Goodwin. Goodwin . . . Sometimes when telling people my name I drop a syllable: Tamara Good, which is ironic as I've never been anything of the sort . . . (p. 3)

There's something about the Irish that makes them natural born storytellers, on and off the page - and Cecelia Ahern is no exception to that rule. This young, prolific, Irish born-and-bred author has become so successful that she's branded her own name. She writes everything from short stories to novels turned screenplays (P.S. I Love You), and she even created the television show Samantha Who?

I must admit that I never read Ahern's work before THE BOOK OF TOMORROW, but I was pleasantly surprised by this, her latest novel. It's the story of Tamara Goodwin, a rich and spoiled 16 year-old whose life is suddenly turned upside- down when her father commits suicide. He dies bankrupt and leaves behind a mountain of debt. This forces Tamara and her stunned, grief-addled mother to vacate their foreclosed mansion in Dublin and move in with distant relatives in an old farmhouse in County Meath (the rural countryside of Ireland). For Tamara, living in a place without her friends, Facebook and Twitter -- and living with a dictatorial aunt and hen-pecked uncle in the middle of nowhere -- is a living hell. But when a cute guy manning the traveling library truck acccidentally enters Tamara's life, things begin to change.

Tamara not only checks out the cute guy from the lending library, but she also checks out a leather-bound, padlocked book, void of title or author name. When she pries the book open, she discovers entries written in her own handwriting and dated for the next day - as if a diary penned twenty-fours in the future (hence the whole "tomorrow" tie-in of the title akin to the protagonist's name). Tamara, while at first skeptical, soon puts the powers of the book to work in order to help her solve the mystery of her father's death, why her mother seems to be plunging deeper into an almost comatose level of grief, and the very strange behaviors of her aunt and uncle. Add to the mix ruins of a burned down castle, an ancient (and charming) bee-keeping nun privy to Tamara's family history and many painful secrets, and Ahern spins this coming-of-age tale into one of magical suspense.

The mystery elements of the story certainly kept me turning pages, but it was the first-person narrative voice of Tamara that hooked me. Her grit, rebellion, and the flares of her sarcasm shed light on how a spoiled teenager navigates through the dark passageways of grief and loss - and that's what made me eager to suspend my disbelief at the fantasy elements of the plot and savor all 310 pages of this intriguing story.

NOTE: This book was reviewed via an ARC (Advanced Reader Copy) of the novel as provided by HarperCollins. 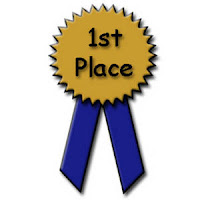 I'm pleased to announce that one of my short stories has won the Ramsfield Press Award for Short Fiction.
(Ramsfield Press is an independent book publisher based out of the Chicago, Illinois area; William "Bill" Moser is the editor.)  The contest dealt with stories centered around the themes of cooking and food - two of my favorite pastimes!

In this piece, entitled "B.B.," a young girl tells a tale of the summer she spent with her food-obsessed Southern Grandmother.

To read the story and learn more about Ramsfield Press, link HERE.
Posted by Kathleen Gerard at 11:09 AM

To Have And To Kill 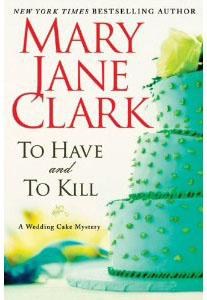 If you enjoy a tight, well-organized storyline, a straight-forward cast of characters and a brisk plot that will keep you guessing the whodunnit, then the latest from romantic suspense writer, Mary Jane Clark, is your perfect indulgence. In TO HAVE AND TO KILL, Ms. Clark departs from her well-received Key News Thrillers (there are 12 in all) and launches a brand new series featuring Piper Donovan, a 20-something, struggling actress, whose character has been killed off the soap opera, A Little Rain Must Fall.

Out of a job and stalled in the romance department, Piper returns home to temporarily live with her parents in suburban New Jersey. Her mother, the owner of a local bakery, declines the chance to make the wedding cake for  Glenna Brooks, the star of A Little Rain Must Fall.  Piper is perplexed because Glenna will soon be departing as the femme fatale of the popular daytime drama, and she is also Piper's friend.  (Hint: Mom has a secret!)

With no other job prospects in sight, Piper steps into her mother's kitchen and decides to take on the challenge of making the wedding cake herself. In the process, she suddenly finds herself part of a larger storyline that bursts with more controversy and drama than the soap opera itself. A Little Rain Must Fall is planning a reunion show and a multitude of Glenna's old beaus suddenly climb out of the woodwork. Is someone trying to stop the wedding?

Clark concocts a recipe for page-turning suspense that includes expensive, lavish diamonds; a glamorous photo shoot with Martha Killeen (an Annie Leibovitz-type celebrity photographer); and the murder of one of daytime's hottest stars.

TO HAVE AND TO KILL is set in and around Manhattan and offers cameos in places like Saint Patrick's Cathedral and Colicchio and Sons, the restaurant manned by Tom Colicchio, one of the judges from TV's Top Chef.

While everyone is trying to flush out the murderer, a handsome FBI agent adds spice to the 93 compact chapters that count down to Glenna's big wedding day. This book will not only satisfy your craving for a good mystery, but it will also make you eager to see what Clark intends to whip up next in this exciting, brand new series.

NOTE:  This book was reviewed via an ARC (Advanced Reader Copy) of the novel as provided by NetGalley.

To Have and to Kill (A Wedding Cake Mystery) by Mary Jane Clark
(William Morrow, Hardcover, 9780061995545, 320pp.)
Publication Date: January 2011
To purchase this book via INDIEBOUND click HERE
Posted by Kathleen Gerard at 4:01 PM