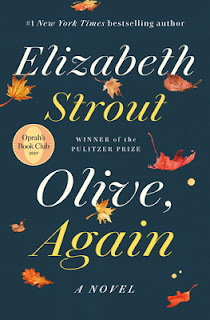 This was my favorite read of the year for 2019!  Really admire Elizabeth Strout’s work. She writes masterful sentences and creates indelible characters who are not always likeable, but fully human...and surely entertaining!
A prickly Maine woman finds hard-won wisdom as she butts up against the challenges of aging and ordinary life--and others struggling to survive.


In the Pulitzer Prize-winning Olive Kitteridge, Elizabeth Strout (My Name Is Lucy Barton) traced the life of a rigidly stoic, set-in-her-ways, lifelong inhabitant of fictional Crosby, Maine. Olive--a former high school math teacher and the wife of a small-town pharmacist--is judgmental, with often-grating hard edges that forge her opinions and resilience.


In Olive, Again, Strout picks up Olive's story in her seventh and eighth decades. Olive, an aging widow, contends with a now elusive world and her feelings for widower Jack Kennison, the antithesis of Olive. Jack, a staunch Republican and former professor at Harvard, migrated to Crosby after a co-worker accused him of sexual harassment and he was fired. He is drawn to Olive, questioningly.


As the narrative unfolds, readers learn that Olive and Jack have married. Despite their vastly different pedigrees, they are moored in similar emotional harbors, which unites them. Olive and Jack had first marriages to good people, yet both carry--and grapple with--guilt. Loneliness plagues them. They take stock of their fates, choices and destinies in a changing world, while facing the often-humiliating infirmities of aging. Jack tries to reconnect with his estranged daughter, a lesbian whom he never accepted. Similarly, Olive contends with her strained relationship with her son, who's married and raising a blended family in New York City.


The 13 episodic stories that constitute Olive, Again are deep and meaningful--made richly entertaining and accessible through Strout's skillful blend of the serious with the comedic.

Posted by Kathleen Gerard at 3:05 PM 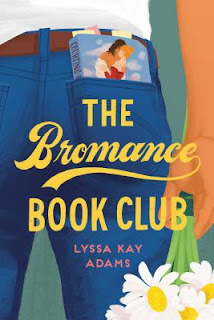 With the help of a romance book club for men, a baseball player sets off on a clever crusade to save his marriage.
It takes two people to fall in love, but it also "takes two people to ruin a relationship." Such is the case for Gavin Scott--a second baseman for the Nashville Legends baseball team, who suffers from a stuttering problem--and his loyal, devoted wife, Thea, the mother of their young twin girls. The couple married when Thea became pregnant. What started as a happy union settled, over time, into a sexless routine as "the daily necessities of dealing with the kids and the house and his game schedule" wore down their relationship.
When Gavin learns that Thea's been faking it in their marital bed for years, the revelation pits them against each other, resurrecting more truths and slights, until their faltering marriage comes completely undone. Gavin seeks the support of his friends, a group that meets covertly to eat, drink and discuss Regency romance novels. They refer to these books set in 18th- and 19th-century England as "manuals" that coach them in their romantic dealings with their partners and spouses.
The Bromance Book Club is the opening installment of a fun and funny, sports-related romance series. It unspools a dual-threaded narrative that juxtaposes Gavin and Thea's story alongside that of a Regency countess and her knight in shining armor. Through a series of clever, entertaining plot twists and striking parallels in the relationships of both couples, centuries apart, Lyssa Kay Adams (The Prospect) depicts how love--and the complications and ecstasies therein--never really changes or goes out of style.

The Bromance Book Club (a novel) by Lyssa Kay Adams

Posted by Kathleen Gerard at 4:48 PM