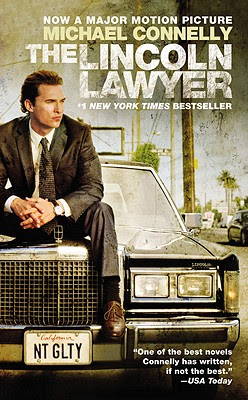 All right, I'll admit it - it was Matthew McConaughey who drew me to read THE LINCOLN LAWYER by Michael Connelly. I don't normally lean toward this type of book, at least not since I devoured Presumed Innocent by Scott Turow more than 20 years ago. But as a fan of MM, I was eager to examine how the story will translate from page to screen. I have yet to see the movie. But having read the book, I cannot picture anyone but Matthew McConaughey playing this part. I wonder if the author wrote the story with this leading man in mind?

The plot boils down to this: high-powered (yet jaded) attorney, Michael "Mickey" Haller knows what he's good at and has a very high opinion of himself - at least amid the legal system. Instead of an office, he works out of his car - a Lincoln Continental (of which there are actually four in the fleet), which serves to chauffeur him to what seems like revolving doors at various courtrooms throughout Los Angeles County. Mickey has done fairly well for himself (his slogan as printed in the Yellow Pages is "Reasonable doubt for a reasonable fee") by defending a slew of guilty lost souls who live on the fringes of society - drug dealers, junkies, prostitutes. You name it and Mickey's defended it - and probably more than once.

Mickey is stymied when he's called upon to defend Louis Ross Roulet, a wealthy resident of Beverly Hills arrested for a violent, ugly assault. Mickey initially sees dollar signs with what he calls a 'franchise case' - an expensive trial with a laundry list of billable hours. But when Mickey rolls up his sleeves and gets down to business, he soon discovers that he's being as hustled as the clients he normally defends. A case that Mickey represented--and plea bargained years before--figures prominently into the Roulet case. Mickey suffers a crisis of conscience and a moral dilemma. Did Mickey's legal counsel of Jesus Menendez, a past client, put Menendez behind bars for the rest of his life for a crime his current client, Roulet, actually committed? It's an ingenious twist that adds texture and depth to this economically written, first person p-o-v story of gripping suspense, vibrant dialogue, and meticulous plotting.

Connelly sets up the first half of the book by establishing the status quo of Mickey's world - one filled with two failed marriages (and two ex-wives who still have a part in Mickey's life), his own shortcomings as a workaholic dad who hasn't always been there for his daughter, and the terrain he mines as a no-nonsense defender of the down and out. The Roulet case tilts Mickey's world on its axis as he tries to figure out a way to help his innocent, yet jailed client (Menendez), while trying not to jeopardize the Roulet case, as it suddenly puts Mickey's own life at risk. The second half of the book deals mostly with the trial and the challenges Mickey faces amid politics on the bench and the back room deals of the legal system.

In the end, however, it is Connelly's flawed protagonist and the arc of his journey that deepens Mickey's redeeming qualities and gains the unwavering empathy of the reader. You can bet that with or without Matthew McConaughey, I'm bound to read Connelly's next legal thriller (The Fifth Witness, a new Mickey Haller book, is due April 5th)...and maybe the backlist of his books, too!

We interrupt this blog to wish everyone
....most especially my beloved father Patrick and my dear sister Patricia....
a Happy St. Patrick's Day!
Posted by Kathleen Gerard at 9:21 PM

Twelve Rooms with a View

I was actually standing on the edge of my mother’s open grave when I heard about the house. Some idiot with tattoos and a shovel had tossed a huge wad of dirt at me. I think he was perturbed that everyone else had taken off, the way they’re supposed to, and I was standing there like someone had brained me with a frying pan. It’s not like I was making a scene. But I couldn’t leave. The service in the little chapel had totally blown—all that deacon or what ever he was could talk about was god and his mercy and utter unredeemable nonsense that had nothing to do with her—so I was just standing there, thinking maybe something else could be said while they put her in the earth, something simple but hopefully specific. Which is when Lucy came up and yanked at my arm. 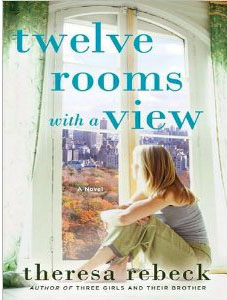 And I’m thinking, what house?

Twelve Rooms with a View (Chapter One, Page One)

Can you imagine your estranged, alcoholic mother dying and leaving her second husband's $11 million dollar Central Park West (NYC) apartment, to you and your sisters? Well, acclaimed playwright (novelist and screenwriter) Theresa Rebeck imagined it and shaped it into her novel, TWELVE ROOMS WITH A VIEW. In the story, the Finn Sisters suddenly find themselves strategizing ways to keep the historic piece of inherited real estate in their possession - away from the Drinans, the three sons of the second husband who grew up in the legendary, Edgewood Building, and a co-op board that wants to usurp the property from both of the families.

The apartment itself (including a ghost), and the dead, eccentric mother, emerge as central characters in this book narrated by Tina Finn. She is a young woman, a house cleaner, who lives in a trailer park and is on the skids, both professionally and in the relationship department. After the mother's funeral, Tina is appointed by her much more successful and domineering sisters to move into the palatial Edgewood as a squatter and stake the sisters' claim to the apartment they feel they've rightfully inherited. However, when Tina settles in, she is met with legal opposition and entanglements from the quirky Drinan sons (one of whom is a NYPD cop and has romantic designs on Tina), the co-op board, and certain residents of the Edgewood with agendas all their own.

The arc of the story follows Tina, a petty thief, who is suddenly forced (at the age of 32) to assess her own life, the lives of her sisters, the life and death of her mother, and even the Drinan sons on a level much deeper than she's normally accustomed to. It is in doing so that Rebeck offers a fascinating exploration into the themes of family (and the flaws and secrets therein), grief, forgiveness, greed, self-interest and the lengths some people must go to in order to do the right thing and transform their lives - and the lives of those around them.

Rebeck writes big scenes and pitch-perfect dialogue. And while the richly woven characterizations and sprawling interior monologues often over-shadow the plot, for me that's what made the story even more compelling. Beyond the legal and real estate intricacies, you'll be eager to make the journey with Tina Finn because she offers a bold, comically honest and ultimately self-aware voice in modern, contemporary fiction.