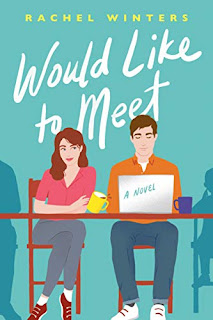 Who can resist lively rom-coms in the vein of Nora Ephron?


An aspiring talent agent sets out to prove to an Oscar-winning screenwriter that people can fall in love just as they do in the movies.


Debut author Rachel Winters hits all the right notes in Would Like to Meet. Single Londoner Evelyn Summers once dreamed of becoming a screenwriter. But she has settled into being the "longest-serving assistant in the industry," working for William Jonathan (Monty) Montgomery, an eccentric, high-powered, old-school talent agent. Things take a turn, however, when Monty reassures production duo Sam-and-Max that Evie can light a fire under screenwriter Ezra Chester and convince him to finish a script for which he's been contracted. Evie perceives Ezra--an "Academy Award winner, charitable heartthrob, and industry darling"--to be an "arrogant, insufferable arse." The stakes are raised when a possible promotion to agent is dangled before Evie. The problem, however, is that Ezra believes "Oscar winners... don't write rom-coms."


In order to get Ezra to fulfill his commitment on deadline and convince him to stop being so "short-sighted about the genre," Evie agrees to serve as his inspiration and "living proof." She proposes that she can meet a man the way it happens in rom-coms.


Would Like to Meet: A Novel by Rachel Winters

Posted by Kathleen Gerard at 3:54 PM