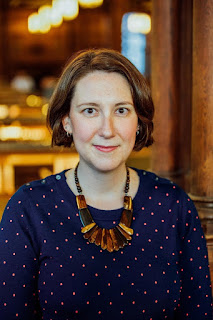 Kate Racculia is the author of the novels This Must Be the Place and Bellweather Rhapsody, an ALA Alex Award winner. Her third novel, Tuesday Mooney Talks to Ghosts (reviewed below), centers on an adventurous treasure hunt through the city of Boston.
Why did you set the story in Boston?
I moved to Boston to get my MFA from Emerson College. After grad school, I spent 11 years working there--first as a marketing writer in financial services, then as a prospect researcher. It was a niche fundraising job that involved researching and profiling wealthy donors--very similar to the job Tuesday Mooney holds in the novel. It was only after I moved out of Boston and settled in Bethlehem, Pa., that I really began to miss the place where I'd become a young adult.
So, the novel pays homage to your affection for the city?
The novel is a love letter to Boston and my life there, which I treasured. I wrote the book during the 2016 election, the constant cruelties of the Trump presidency, #MeToo--under increasing distraction, destruction and pain, and my own anger, confusion and alienation. I believe that art can be an agent for change, a political action, a comfort in the face of brutality. The novel also deals with adventure, friendship, a capacious understanding of human connections and family, work and responsibility, and wealth.
Wealth and money are central to the story?
Without ever intending to, I learned an awful lot about wealth in the jobs I had: how wealth works in America, its inextricable connection to power, how inequitably both are distributed. What having a lot of money can do to people, namely: insulate them from the world, destroy their perspective and make them paranoid and selfish--or allow them to be incredibly generous, and give them tools to remake the world around them.
Is this where the idea for the novel hatched?
I always try to write with a question in mind rather than an answer--to create a series of givens about psychologically realistic characters, to place them in high-genre situations and learn who they are by what they do, how they react and feel, and how they're capable of surprising even themselves--especially when they encounter the uncanny, the strange, the heightened. There's a terrific tension there that I love to play with, and I do use the word "play" intentionally; at its best, writing for me is a form of play and discovery.
Your characters are always infused with layers of eccentricity.
I love other people--characters--in all the ways that loving other people is itself complicated, endlessly interesting, frustrating, weird, heartbreaking and hilarious. So, I write both to get to know and get to experience many other people, to tease out my own identities and curiosities, but also explore imagined lives and adventures beyond my own. I tend to share with characters my own loves and worries, so we can almost investigate those mysteries together.
What draws you to creating ensemble casts?
I was an only child, and lived 30 miles away from the district where I went to school (and where my mother was a teacher). That degree of remove gave me a unique point of view on groups, the mystery of where and how I or any one person fit in (or didn't), and how everyone brought their own, often secret story into this combined larger tale that we were all a part of. It was fascinating and confusing--I've found many, many people who are "My People," but growing up I was an outlier, which was much easier for me to process and understand in fiction rather than in real life.
Did this inspire you to create Tuesday Mooney as a "loner"?
I have always loved stories about human connections--friendships, teams, and found families, whether at work, school or from neighborhoods. And I am, constitutionally, an introvert loner, so stories where introvert loners are essential parts of a group--while retaining their unique identities--really interest me.
Why are grief, loss and memories from the past recurrent themes in your work?
I think I'm just drawn to the mysterious--the dark, unexplored corners in people, in history, in the world around us, and how the attempt to plumb those depths, the work of seeking and trying to understand (even though full understanding may never be possible), can be the work of a whole life.
In terms of the "mysterious," a ghost figures prominently in this novel.
I flat out love a ghost story; always have. Ghosts were people, after all, with all the desires and fears and complexities of living characters, with that added flair of morbid mystery.
A puzzle resides at the heart of this novel. Off the page, do puzzles interest you?
Ha! Funnily enough, I'm not much of a puzzler. I'm a ringer at pub trivia and would love to get on Jeopardy! one day, but I'm not a big puzzle-as-a-pastime person. Although, I've always had an appreciation for seeking solutions.
Aha, seeking solutions... is that what inspired the treasure hunt that propels the mystery of the story?
I adore mysteries themselves, whether a procedural television show, a P.D. James novel, or a larger, less-solvable puzzle about the things in life we can't understand, explain or account for--tackling those puzzles, even when they're painful or tragic, gives me an enormous amount of pleasure. I almost prefer a mystery that doesn't have a straightforward solution, a prize that gets refracted and redefined by human messiness and isn't what you thought it would be. Indiana Jones and the Last Crusade was a huge influence on this novel. The true grail isn't the object you seek, it's what--and who--you discover along the way, and how the journey changes your perception about what you value.

This interview is a reprint and is being posted with the permission of Shelf Awareness. To read this Q&A on Shelf Awareness for Readers (October 15, 2019), link HERE
Posted by Kathleen Gerard at 12:45 AM